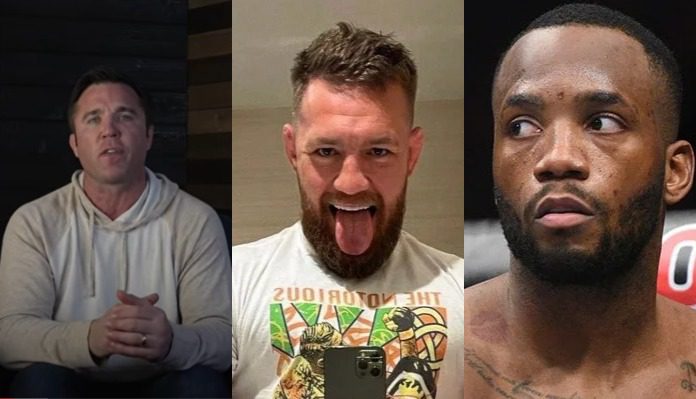 Chael Sonnen says Leon Edwards has been offered his show and his win money to step aside for Conor McGregor to face Kamaru Usman.

Edwards (19-3 MMA) is expected to challenge Kamaru Usman (20-1 MMA) for the UFC welterweight title later this summer, likely in July. The proposed title fight would be a rematch of a bout that occurred over six years ago when both men were prospects in the promotion. The pair originally met in December of 2015, with ‘The Nigerian Nightmare’ earning a unanimous decision victory over ‘Rocky’, thanks in large part to his wrestling.

While UFC President Dana White has assured fight fans that Leon Edwards is “100% next” for Kamaru Usman, Chael Sonnen is suggesting otherwise.

According to the ‘American Gangster’, White and company have offered the Birmingham native “his show and his win money” to step aside so that Conor McGregor can face Kamaru Usman next.

“I am being told that Leon has been offered his show and his win, whatever was negotiated for Leon to fight Kamaru is being offered to him. ‘We will mail you a cheque to step aside. We have the right to push you aside, (but) we don’t want any hard feelings. And, we acknowledge that you deserve this. So, we are going to send you what you agreed on and you get to stay home.’ With the belief being that Conor’s gonna step in.”

Conor McGregor has of course been out of action since suffering a broken leg in his trilogy fight with Dustin Poirier at UFC 264. With that said, ‘Mystic Mac’ recently stated he was eyeing ‘The Nigerian Nightmare’ as his next fight.

“I believe myself vs. Usman for the 170-pound title for my comeback fight is the one I’m eyeballing at the minute,” McGregor said. “I’ve gotten myself down to a lightweight frame, but I’m big now. I feel big, I feel strong, I feel healthy, I’ve got good energy. Coming back after a gruesome injury, I do not want to deplete myself. There’s no need to deplete myself. And I feel confident against Usman – a jab-happy, sloppy orthodox wrestler with no submissions whatsoever. What’s he gonna do? Where’s the danger here? I don’t see a danger with him.”

Kamaru Usman responded to Conor McGregor by asking fight fans if they wanted to see a murder inside of the Octagon.

Do you think the UFC would pass up Leon Edwards, who is undefeated over his past 10 fights, in favor of a Conor McGregor vs. Kamaru Usman matchup?