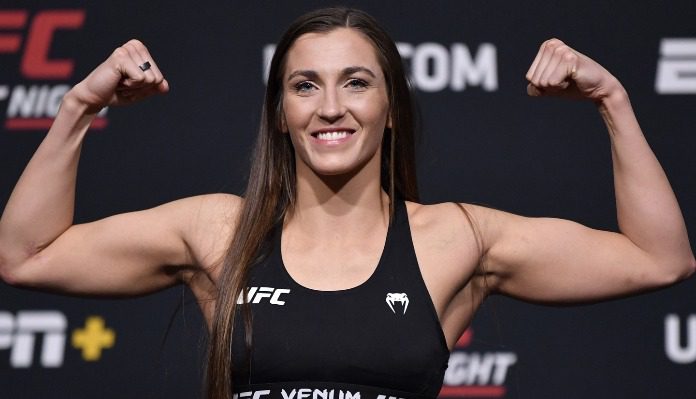 De La Rosa and Barber were set to meet at UFC 269, but Montana was forced out of the bout with an injury. Yet, shortly after, Barber suffered a similar injury and once that happened, the hope for De La Rosa was to get the fight rebooked.

“I’m super pumped, right when they gave me the option for it, I was like ‘yeah we might as well rebook it.’ There is no point in trying to find another person, she has been wanting to fight me, and I’ve been wanting to fight her just as much so it will be a really entertaining fight,” De La Rosa said on Just Scrap Radio on BJPENN.com.

The two will now fight on Saturday at UFC Vegas 52 and heading into the scrap, De La Rosa knows Barber will try and be in her face right away. However, even if Barber gets in her face, De La Rosa believes her wrestling will be a key part of this fight.

“I know she comes with a lot of aggression, I think she will come at me really hard and I’m excited to showcase all my skills and put on an entertaining fight,” De La Rosa said. “Just show my striking game and show I’m better everywhere… I think I have the range on her, I’m the longer fighter and I think my wrestling is better.”

Although Montana De La Rosa believes she is better everywhere compared to Maycee Barber, she isn’t sure how the fight will play out. She knows Barber is as durable as they come, but even if she doesn’t get the finish, she expects an exciting fight for the fans.

“You never know what to expect with this fight, could be a finish, could be a long three rounds. We are both durable, we both haven’t been finished too much, it will be exciting,” De La Rosa.

If De La Rosa does get the win over Barber at UFC Vegas 52, she isn’t sure what would be next for her. But, she knows she would steal a lot of Barber’s hype and would likely get another ranked opponent next.

“It is really exciting because she is so well-known, it will help me take some of her hype and get my name in people’s mouths more and hopefully take her number as well,” Barber said.