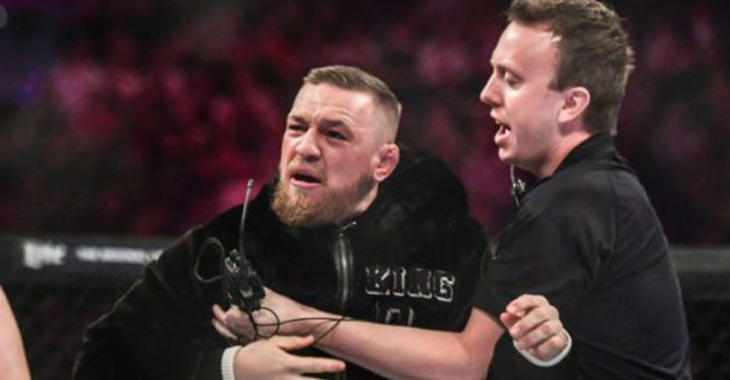 Last weekend, Bellator touched down in the MMA hotbed of Dublin, Ireland with Bellator 187. While the night included some memorable action, by far the biggest headline to emerge from it stemmed from UFC lightweight champ Conor McGregor‘s rushing the cage during teammate Charlie Ward’s fight with John Redmond.

Believing his teammate had won by stoppage, McGregor hurdled the fence and celebrated with his foe. When referee Marc Goddard attempted to eject McGregor from the cage, the Irish star went haywire, shoving Goddard and even slapping a commissioner.

Since then, the world has waited on eagerly for both a statement from McGregor and news of his inevitable punishment. While a fired-up McGregor Tweeted (and deleted) a profanity-laced explanation earlier this week, he has now released a legitimate apology for his actions. See it below:

I sincerely apologize for my behavior at last weekends fight event in Dublin. While trying to support a loyal teammate and friend, I let my emotions get the best of me and acted out of line. As a multiple weight UFC champion, executive producer, role model and public figure, I must hold myself to a higher standard. The referee Marc Gonard was making a horrendous decision in trying to pick an unconscious fighter up off the floor and force the fight to continue into the second round. Even against the wishes of the said fighters coach. The fight was over. After witnessing my fighter in a fight where the worst happened and the opponent passed away from his injuries on the night, I thought the worst was about to happen again, and I lost it and over reacted. I am sorry to everyone. I sincerely apologize to the Director of the Mohegan Tribe Department of Athletic Regulation, Mike Mazzulli, all the officials and staff working the event, Andy Ryan and his fighter John, two stonch ones that put up a great fight every time. That side will always have my respect, and lastly every one of my fans. I love yous all! I’ve always learned from my mistakes and this will be no different.

What do you think of this apology from Conor McGregor?