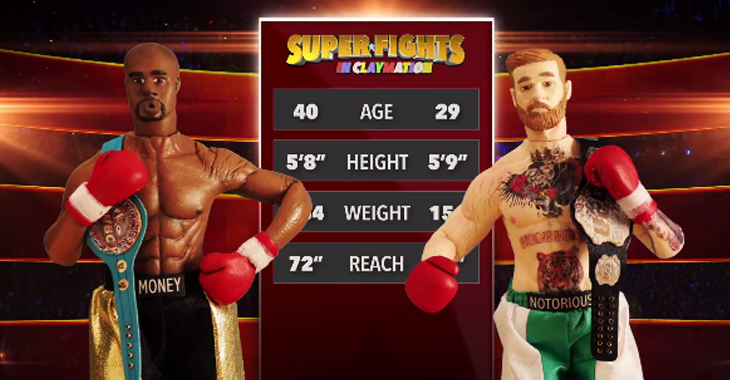 We’re getting so close to Conor McGregor stepping into the ring with Floyd Mayweather that you can practically taste the money flying around in the air. Speaking of moolah, did everyone know that this pay-per-view is going to set people back $99 plus tax and other hidden charges? To some people, that’s just too steep. Going to a bar to watch it is also exhausting, the volume is never right and you’re around drunk, screaming people doing the McGregor strut. We here would never condone you watching the fight through an illegal stream, so we’re going to give you the next best thing. Just watch this claymation video of the whole fight today, instead of watching the real fight on Saturday night. Let’s face it, the clips are going to be online anyway. We don’t want to spoil the ending for you, but Conor McGregor cheats. After a barrage of a billion, tiny rabbit punches, McGregor hauls off and throws a leg kick at Mayweather. We don’t think he would ever do that, considering it would cost him nearly as much as he’s expected to earn come fight night, but never put it past him. One thing is for sure, Conor McGregor will fight dirty: Tight clinches, dirty boxing, jerking Mayweather around, twisting his arms in tangles to potentially cause an injury. It’s really the only way McGregor has any hope, it’s just a matter of exactly how dirty he’ll be. We’ll all find out in a few short days and this will all be over.