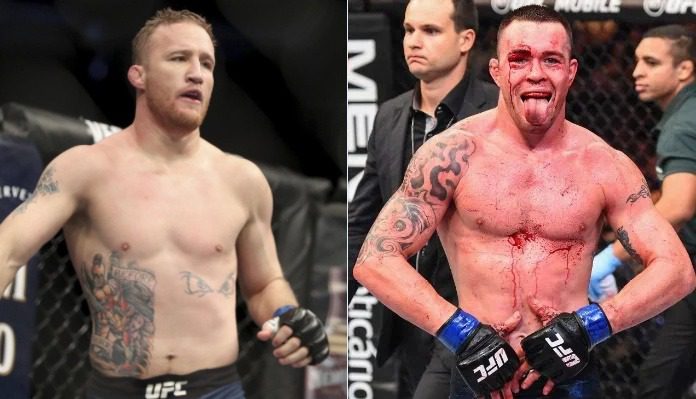 Colby Covington has shared his prediction for tonight’s UFC 274 main event, this while trashing Justin Gaethje in the process.

Gaethje (22-3 MMA) will take on Charles Oliveira (32-8 MMA) in the headliner of tonight’s pay-per-view fight card in Phoenix, Arizona.

Oliveira missed weight by a mere .5 pound yesterday and was forced to relinquish his lightweight title and forfeit a percentage of his fight purse. With that, ‘Do Bronx‘ is not eligible to take home the now-vacant lightweight title this evening.

Despite the chaos at yesterday’s weigh-ins, former UFC interim welterweight champion Colby Covington is still riding with Charles Oliveira to extend his current win streak to eleven in a row this evening.

‘The King of Miami’ took to Instagram where he shared the following betting advice, this in addition to trashing Justin Gaethje for his recent comments (see those here).

“Greeting nerds and virgins. America’s champ is back with America’s pick of the week brought to you by Colby Covington Inc. and the undisputed king of the sports book MyBookie.ag. We have UFC 274 going down tonight with Brazil’s second favorite fighter, right behind yours truly, Charles Oliveira taking on ‘Duck Lip’ Gaethje. We all heard what you said to the Nelk Boys, Gaethje (see that here). And even though you’re dumber than a bag of rocks, at least you’re smart enough to know if we ever get locked in a cage.. I’d beat the ever living sh*t out of you junior. And, if you look in the mirror, I guess two mirrors in your case. One right here in front of you and one somewhere over here for that lazy eye. You look in those mirrors and you get honest again. You know you don’t stand a chance tonight either. That’s why the people are going to steam that Oliveira money line and make those bank account great again.”

Who are you picking to win tonight’s UFC 274 main event?