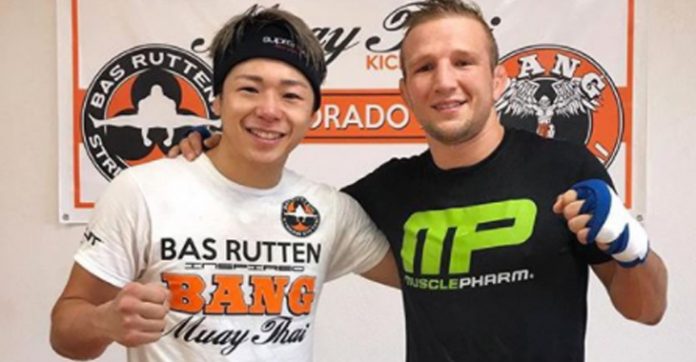 Cody Garbrandt and TJ Dillashaw had and seemingly will always have beef. An entire Ultimate Fighter season culminating in a title fight that Dillashaw won passed, but Garbrandt understandably wants to run it all back. In the process, he’s bringing up all the old ghosts to haunt Dillashaw once again. His rival is using some recent sparring footage to add to his allegations and gym stories that TJ Dillashaw is a guy who is notorious for being overly aggressive in training.

One of the biggest dirt bags in the game. @TJDillashaw https://t.co/1zlplwVa9I

The out-of-context footage that Garbrandt is commentating on is from multiple time K-1 champion Takeru Segawa’s trip to train with the UFC bantamweight champion and his coach Duane Ludwig. However it may look, Takeru later said that he was completely fine with the late hits and felt proud to get a rise out of TJ Dillashaw. The kickboxing prodigy’s entire trip was heavily documented on everyone’s Instagram accounts and even a four-part documentary on Abema TV. After the hard sparring session, both paid respect to one another.

While we can’t comment on events that transpired behind closed doors, we can only take everyone at their own word and look at evidence objectively. However, it seems like there aren’t really any squeaky clean hands in this. After all, Cody Garbrandt himself hyped up their last fight with footage from training where he ‘knocked out’ Dillashaw, which brought in criticism as well. Dillashaw and Garbrandt were in talks to save the UFC 222 card, but ultimately Dillashaw is waiting for the Demetrious Johnson superfight.