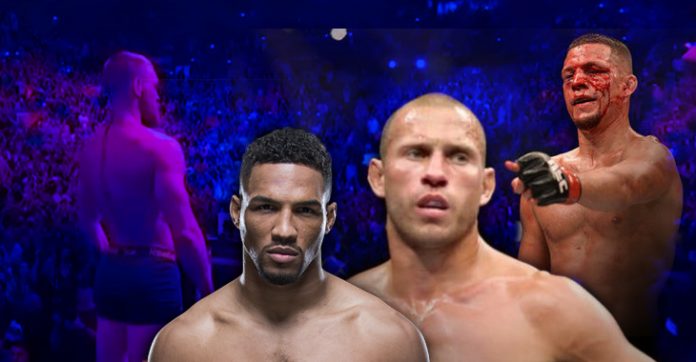 After a wild firestorm created by Conor McGregor revealing that he offered to step in to fight Frankie Edgar at UFC 222, fans were baffled and Edgar’s coach and manager were pissed off to say the least. After refuting McGregor’s claims, Edgar’s manager Ali Abdel-Aziz said he requested a new division be created: The 165-pound division. This isn’t the first time the weight class has been talked about. Super lightweight interests more than just the Champ Champ™ supposedly looking for a third title, there’s a whole potential top five who are waiting for it to be formed.

When conor called the ufc he asked them create a 165lb belt. He thinks @danawhite was born yesterday. This is fact. Waiting for response Mr. Helwani. #BeefIsReal

Despite an impressive 7-2 run in the UFC’s 155-pound division, Jorge Masvidal eventually jumped up to welterweight due in part to the IV ban by USADA. Before 2015 though, Masvidal spent the majority of his career in the lightweight division, even losing a decision to Gilbert Melendez for the Strikeforce lightweight title. While 155-pounds is just too crazy of a cut and Masvidal has experienced a mixed 4-4 success at 170-pounds, a 165 ‘super lightweight’ division could be the Goldilocks weight for Masvidal.

“I was definitely done with 155, then when I heard they ended up banning IVs I was like, there’s no way I can make 155. I lose about 18 pounds the last two days [when competing at 155] of just straight water, so for me, to take the IVs away, there’s no way I could make 55. […] I just want to go out and compete. Plus the main thing is, at 155 I need a good amount of time to prepare just to make the weight cut. At 170 I can just take fights as they come and just compete as much as I want.” – Jorge Masvidal speaking to MMA Fighting back in 2015.

Former UFC lightweight title challenger Kevin Lee has already been very vocal about the creation of a 165-pound weight class. When speaking about the two divisions that would border 165, he threw out some numbers that seem plucked out of thin air, but they’re actually closer to reality than you may think. Lightweight and welterweight have a combined 207 fighters, according to the UFC website. Which is more than enough to create a new class without diluting either division. That is, even if the UFC would form 165 out of already existing talent instead of also signing new fighters, or putting on one of their infamous seasons of The Ultimate Fighter like they did to form women’s flyweight.

“I think there shouldn’t be a holdup on the 165-pound division. I think they should open it up now. I think after July, they’re going to open it up. […] There’s 150 guys at lightweight all fighting for one title, and the top 30 guys can’t all be the champ. You’ve got the same thing going on at welterweight. There’s 150 guys. You can split that up. You’ve got 100 guys at 165 that can make it. You’ve got guys like Jorge Masvidal, Donald Cerrone, me included, Nate Diaz. Guys who are kind of stuck in the middle between the two.” – Kevin Lee speaking to MMA Junkie last year.

ICYMI – After he got knocked down in #UFCAustin‘s headliner, @ymedeiros quickly got back up and had a message for @Cowboycerrone: “You, mother-cker!” They both got a laugh. Full story: https://t.co/N2o51gpLUq pic.twitter.com/BDs4tO8r5W

Good ol’ ‘Cowboy’ Donald Cerrone has jumped back and forth from welterweight and lightweight. He’s come incredibly close to capturing the title in both divisions, but never quite made it. Even after his vintage and exciting finish against Yancy Medeiros at UFC Austin, Cerrone voiced interest in returning to lightweight to potentially challenge Khabib Nurmagomedov for a belt, but also brought up his hopes of a 165-pound division.

Much like his former rival Donald Cerrone, Nate Diaz has spent some time at lightweight and welterweight, but has never held up a UFC belt while brandishing his iconic middle fingers. After being bullied by Benson Henderson in their UFC lightweight title fight back in 2012 and slung around by Rory MacDonald at 170, Diaz has all the tools to become a super lightweight champion if only it really did exist. Potential rematches with Cerrone and Conor McGregor could be historic 165-pound fights just waiting to happen.

“If you’re trying to pull me out of a normal life right now, I’m not doing it for a fake title at 155 pounds. I told them I’d take the fight at 165 pounds, no belt. I’m not interested in losing a bunch of weight for no reason. We never talked after that. It’s really not a problem for me, though. You’re trying to call me out of my life. I didn’t call you begging for a fight. I’m fine with taking a fight, but I’m telling you what it’s going to take.” – Nate Diaz speaking to ESPN.

Ah, the reason for this entire 165-pound division speculation to begin with. Frankie Edgar’s manager broke the news that Conor McGregor allegedly spoke to the UFC about creating the new weight class ahead of the talks he would be stripped of his second title. The Champ Champ™ may have been looking to add an unprecedented UFC Triple Crown achievement to his long list of accomplishments.

Despite his immense drawing power and leverage with the UFC, even McGregor may not be able to just get them to give him a new title, he’d have to fight for the inaugural belt. If he’s not going to fight the winner of Tony Ferguson and Khabib Nurmagomedov at lightweight, or go and challenge Tyron Woodley for the welterweight strap, what about Conor McGregor and Nate Diaz for the 165-pound title? Not only does it not hold up a division or incur the wrath of criticisms for Diaz jumping the line, but the UFC gets the gigantic money fight they need.