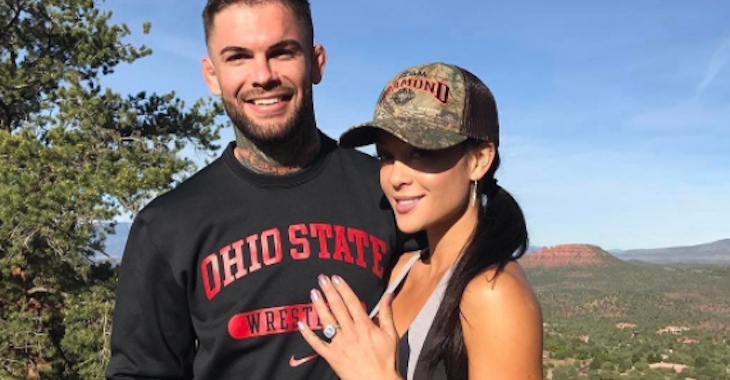 UFC bantamweight champion Cody Garbrandt is one of the fastest rising stars in MMA – but don’t expect him to be adopting the Dan Bilzerian playboy lifestyle. The bantamweight king is now engaged to his long time girlfriend, Danny Pimsanguan.

While Garbrandt will soon have to begin wedding planning with his bride-to-be, his current focus is on a bantamweight title fight with former champion and estranged former teammate TJ Dillashaw. The two will battle for gold at UFC 213 this July 8.

Ahead of this title fight, Garbrandt and Dillashaw are serving as coaches on the latest season of The Ultimate Fighter. On this season, which is unfortunately struggling from a viewership standpoint, the pair are mentoring a cast of Ultimate Fighter veterans, such as James Krause, Gilbert Smith, Hayder Hassan and Julian Lane.

While this season airs, Garbrandt and Dillashaw have been keeping their beef very much alive on social media, exchanging twitter attacks with near daily regularity. The latest heat between the two occurred this morning, when Dillashaw’s mother actually got involved.

As of now, there’s no news on a date and location for Garbrandt and Pimsanguan’s wedding, though we can probably expect it to occur after UFC 213. Here’s hoping we can all expect invitations!

Congrats to Cody Garbrandt and his bride to be!