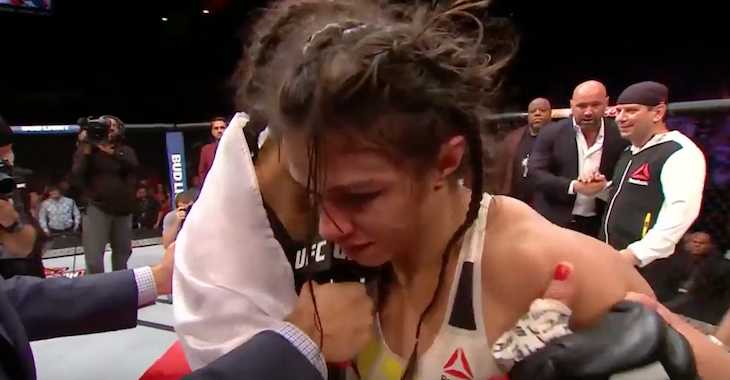 Over the weekend, in the co-main event of UFC 212, number-one-ranked strawweight Claudia Gadelha submitted a fellow former title challenger in Karolina Kowalkiewicz in the first round. In doing so, Gadelha reaffirmed her status as the best strawweight alive outside of the champion, Joanna Jedrzejczyk.

If you ask Gadelha, however, she’s the best strawweight alive, outright – despite her two previous losses to Jedrzejczyk. She explained this feeling during the UFC 212 post-fight press conference (via MMAMania.com).

“I consider myself the best fighter in the division,” Gadelha said. “But I think a few things are missing that I needed to do to perform well inside of the Octagon. And that’s why I decided to change everything in my life. It has not been easy to leave my comfort zone. Ten years living in Rio, I went abroad alone, nobody there. Training with different trainers.”

“It’s very, very tough, but I got to a point in my career where I felt I needed to improve and to become the fighter that I wanted to be, and that I desired to be.”

“It doesn’t bother me at all to talk about that,” Gadelha said about her second loss to Jedrzejczyk. “We’re in a sport where you can win and you can lose at anytime. Of course, we always want positive results, but we can’t always get that.”

“And about my two defeats to Joanna, I only believe there is one. There’s two on paper, but if you were to analyze the fight, I did not lose that first fight to her. The second fight I really did lose, but if you were to look technically at it, I have better technique, and better MMA technique. I’m not a better striker, but I’m a better MMA fighter than Joanna. But I trained incorrectly to fight with her.”

What do you think of these comments from Claudia Gadelha?