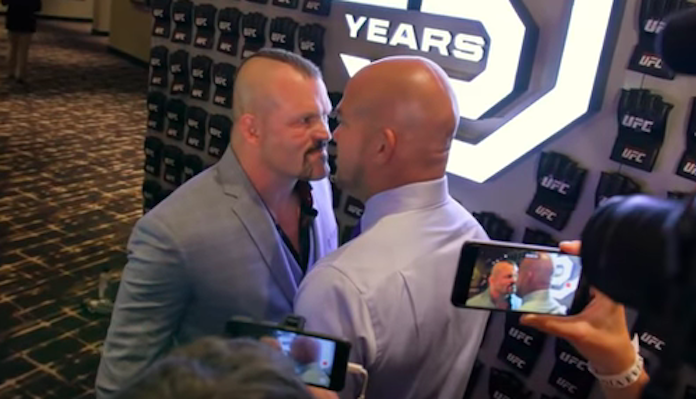 Oscar De La Hoya is unearthing the golden era of MMA by scheduling a trilogy fight between Chuck Liddell and Tito Ortiz.

Whether that archaeological venture leads to diamonds or dust will be heavily dependent on Golden Boy Promotions’ ability to sell a wholly unnecessary fight featuring a pair of all-time great legends in the twilight of their careers.

When speaking with ESPN on Wednesday, De La Hoya confirmed the fight for November 24 at The Forum in Inglewood, California.

“Obviously, both guys are warriors and pioneers,” De La Hoya said. “It’s like [Floyd] Mayweather vs. [Manny Pacquiao, in 2015]. People were asking for that fight for the longest time. It finally happened and it broke records. I think this fight will be very lucrative for both guys. This is an opportunity for them to show the world they still have what it takes to fight in the Octagon. I strongly feel it’s never too late with two guys like this. Two names of this caliber, you can’t go wrong.”

The bubbling anticipation for Floyd Mayweather and Manny Pacquiao stemmed from the idea of pitting two of boxing’s most iconic legends in the ring together for the first time. That fail-proof formula led to a record-setting 4.6 million pay-per-view sells.

However, things are much different on the MMA side with Liddell and Ortiz.

This isn’t some first-time affair featuring two of the top-ranked fighters in the world. Liddell, 48, hasn’t fought in over eight years, and Ortiz, 43, retired well over a year ago after submitting Chael Sonnen at Bellator 170. There is also the fact that Liddell has already defeated Ortiz handily on two separate occasions, making this proposed trilogy nothing more than a 14-year-old grudge match.

So, no, this isn’t like Mayweather and Pacquiao, but that doesn’t mean it won’t be entertaining. De La Hoya is wise to put two of the most popular fighters of all time front and center of his inaugural MMA event.

It’s the type of bout that will turn every head—from the casual, more receptive viewers to the hardcore skeptics. Every fan will have some form of vested interest in the outcome of the fight. Whether that translates into good pay-per-view numbers or not remains to be seen.

One thing is certain: Both Ortiz and Liddell have plenty to gain from taking this fight.

Ortiz has an opportunity to finally secure a win over the man that has bested him on more than one occasion, and this time, he’ll have Father Time on his side. He’s five years younger and by far the more active fighter in recent years. The lead-up to his retirement also came on better terms with him winning three of his last four fights, while Liddell lost five of his last six.

But don’t be fooled into thinking Liddell is merely coming out of retirement for a stroll down memory lane and a quick paycheck. Despite his precipitous decline, it was made abundantly clear that he never wanted to retire in the first place.

So while he hasn’t necessarily been competing as a professional, he has been consistently training and sparring in his time away from the fight business. A win over Ortiz would go a long way in validating his lingering appetence for fighting as a middle-aged man. One more knockout—one more celebratory victory run around the cage—could be the cherry on top of his illustrious career.

For fans in general, it’s a rare opportunity to turn back the clock and pay homage to two fighters that helped pave the way for modern-day MMA competition. They ushered in the golden era of MMA—a time when fireworks, attitude, and nu-metal contributed to the spectacle of fighting.

It’s a special period lying dormant in the heart of every hardcore fan—one that might be unearthed, if only for one night, along with a rivalry that should have been settled a long time ago.