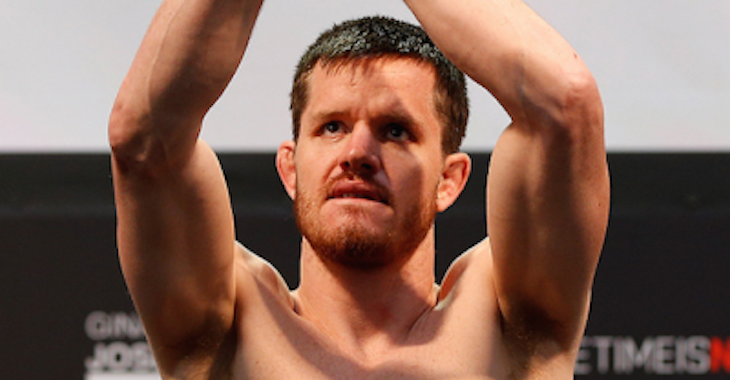 Last week, UFC middleweight veteran CB Dollaway was marching straight toward a light heavyweight bout with Brazil’s Francimar Barroso. The two were scheduled to meet on the undercard of UFC 203, at the Quicken Loans Arena in Cleveland, Ohio. Unfortunately, Dollaway would never make it into the Octagon, as he was forced to withdraw from the fight on the eve of battle.

After the weigh-ins on Friday night, Dollaway and a number of other fighters (including Fabricio Werdum and Urijah Faber) were involved in a freak accident in one of the hotel’s elevators.

According to X-Treme Couture coach Eric Nicksick, who spoke to MMA Junkie Radio about the incident, the elevator cable snapped, sending the passengers onboard falling three stories from the second floor to the basement.

Luckily, all but one passenger emerged from the incident unscathed. The one that didn’t was Dollaway, who sustained a back injury during the fall. This injury was severe enough to force Dollaway out of his looming bout with Barosso. According to his manager Dave Martin (via MMAFighting.com), it’s also kept him from leaving Cleveland.

According to Martin, Dollaway is still in a “significant amount of pain” – enough that he is unable to fly home. On Thursday, the fighter met with a back specialist, who took two X-Rays of his back and neck. He also underwent an MRI. He is expecting test results back today (Friday).

Dollaway is currently on a three-fight losing-streak, having recently come up short to Nate Marquardt, Michael Bisping and Lyoto Machida. Needless to say, the veteran was in dire need of a win heading into UFC 203, but was unfortunately deprived of the chance to get one by this accident. Thankfully, Dollaway was still paid by both the UFC and Reebok for his cancelled bout.

What do you think about Dollaway’s injury? Should he be compensated by the hotel? Sound off, PENN nation!