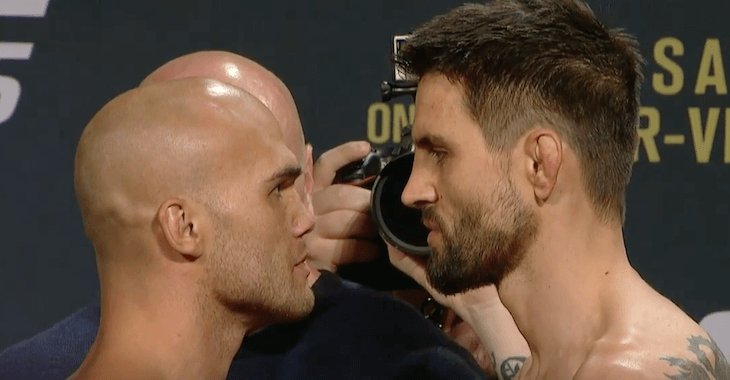 Former UFC interim welterweight champion Carlos Condit is still trying to decide what is next in regards to his mixed martial arts career.

“The Natural Born Killer” is coming off a controversial title fight loss to reigning champion Robbie Lawler, which occurred in the main event of UFC 195 just over 2 months ago.

Condit recently spoke with Damon Martin of Fox Sports where he stated that after watching his fight with Lawler, he definitely feels as if he should be the UFC’s welterweight champion right now, his words:

“I think I watched it twice. For starters it was a great fight. I’m always very critical of my performances so I saw a lot of mistakes that I made. Little stuff, but it’s stuff I’m like ‘oh man I can’t believe I did that’. But overall, I felt like I deserved to get the win,” Condit told FOX Sports.

“I’m not (expletive) about it. Robbie fought a great fight. He’s a warrior, he is a champion, but I think it was my fight that night.”

Following his epic battle with Lawler, which earned the combatants “Fight of the night” honours, Condit announced that he was considering “calling it a career”.

Carlos is still undecided on his future, but added that if he was offered a rematch with Robbie, he would likely make one more walk to the octagon:

“I’m still kind of up in the air for me. I don’t know. I want the title fight with Lawler,” Condit said. “I feel like I should be the champion and I should be defending the belt. We can wish all we want but the reality is what it is. I don’t know. If a fight that piques my interest is offered to me, particularly the rematch with Lawler then I think I could get excited. Otherwise, I think I’m on hiatus.

“It’s a little bit of a waiting game. That’s basically what the UFC told me. Give them a few weeks to kind of figure stuff out and we’ll just see where it goes from there.”

Would you like to see a rematch between Lawler and Condit out together by UFC officials? Sound off Penn Nation!