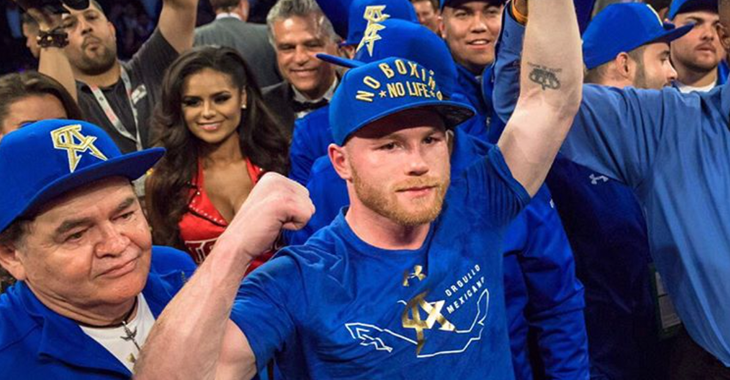 Canelo Alvarez enters tonight’s contest sporting a sensational professional record of 51-1-2, his latest being a third round TKO victory over Rocky Fielding.

Both men will be making a ton of money from tonight’s fight, as Canelo will earn 35 million, while Jacobs is expected to eclipse the ten million dollar mark.

Round one begins and and Jacobs lands a good shot to the body. Canelo returns fire with a right that hits the belt line. A bit of a feeling out process early. Jacobs pumps his jab. Alvarez looks to find a way inside. He lands a jab. Round one comes to an end.

Round three begins and Jacobs switches his stance to southpaw. Canelo with some good jabs to start. He lands a nice body shot while Jacobs is against the ropes. Daniel responds with a pair of jabs. Another good jab from Jacobs. Alvarez replies with one of his own followed by a left hook. Round three comes to an end.

Round four begins and Jacobs is back in the orthodox stance. Canelo with pressure early. He lands a big shot to the body. Both men land punches to the back of the head and receive warnings. The fighters trade jabs. Canelo Alvarez with a left hook. A good counter from Canelo closes out round four.

Round five begins and Canelo lands to hard shots to the body of Jacobs. He is using pressure but Daniel Jacobs is still finding a home for his jab. Good left hook from Alvarez. Another round comes to an end. I have it 49-46 Alvarez through five.

Round six and the fighters stand and trade. Alvarez appeared to get the better of the exchange but Jacobs definitely landed one. Alvarez comes forward and lands a big right hand. Jacobs is on the retreat. Daniel gathers his bearings and throws a jab to keep Canelo at bay. Another good shot from Alvarez before the bell sounds to end round six.

Round seven begins and Canelo Alvarez is immediately the aggressor. He lands a good shot to the body. Daniel replies with a stiff left. Jacobs with another good left hand and then a hook to the body. He is beginning to find his range now. Canelo comes back with a jab up the middle. Alvarez with a left hook. The fighters exchange body shots to close out the round.

Round eight begins and Canelo Álvarez lands a good left hook to get things started. Jacobs comes forward and pushes Álvarez against the ropes. Good shots from both men in a wild exchange. Alvarez with a big right hand! Jacobs counters with a left. Canelo with an uppercut and then a left to the body. He continues to pressure but the bell sounds to end the round.

Another round and another flurry from Canelo to start. He lands a viscous shot to the body of Jacobs. Alvarez with a left hook and then an uppercut. He lands a right hand. Big round here for Alvarez. Jacobs leaps in with a left that lands flush. That was his best shot of the fight. Daniel is looking to turn the tide here. He closes the round with a good combination.

Round ten begins and Jacobs gets off a combination. Canelo gets off the ropes and lands a right hand. Another big right hand from Alvarez! He lands a left hook. Jacobs answers with a straight right. Both men are throwing caution to the wind here. Jacobs gets the better shots in to close out the round.

Round eleven begins and Canelo lands a left hook. He goes to the body with a right hand. Jacobs tries to get in range but Canelo startles him with another right hand. Good body shot now from Alvarez. He lands a combination. Jacobs responds with a flurry. Alvarez catches him with a jab and then another. Good round for Canelo.

Round twelve begins and Canelo Alvarez comes out with pressure. Jacobs slips and falls to the canvas. Canelo with a beautiful combination. Jacobs replies an uppercut. More pressure from Alvarez. He lands some hard shots to the body of Jacobs. Daniel paws with his jab. He needs to land something big here. Canelo with a nasty body shot. Jacobs misses with an uppercut. Canelo continues to pressure. He lands a jab. The bell sounds and this fight is going to the judges scorecards for decision.