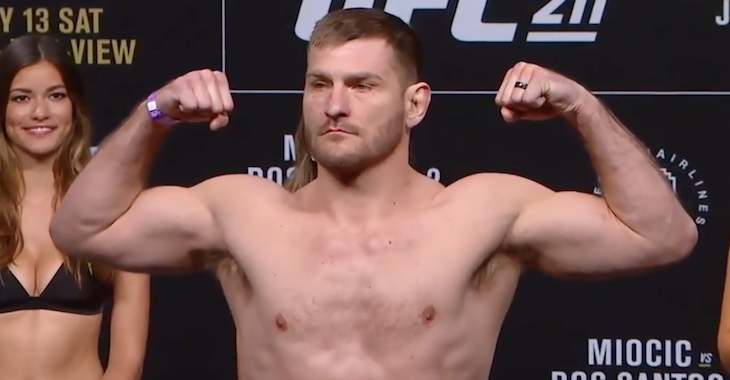 UFC heavyweight champion Stipe Miocic will attempt to defend his strap for the third time at UFC 216 on October 7 in Las Vegas when he squares off with former division kingpin Cain Velasquez.

The fight was first reported to be in the works on Monday evening by BJPENN.com’s Chris Taylor and was later confirmed by James Lynch via mmaoddsbreaker.

I am told that the UFC is aiming to have a heavyweight title fight between Stipe Miocic and Cain Velasquez headline #UFC216 this October.

Per @CTaylor_96 report yesterday. @MMAOddsBreaker spoke to a source close to the situation today. Fight is happening https://t.co/n7QrjnrMbM

The victory served at Miocic’s fifth in a row, as he had previously scored finishes over Mark Hunt, Andrei Arlovski, Fabricio Werdum and Alistair Overeem.

Meanwhile, Cain Velasquez (14-2 MMA) has not competed since 2016 at July’s blockbuster UFC 200 event, where he scored a first-round TKO victory over Travis Browne.

Who do you think will emerge victorious when Cain Velasquez and Stipe Miocic throw down this October in Las Vegas? Sound off PENN Nation!