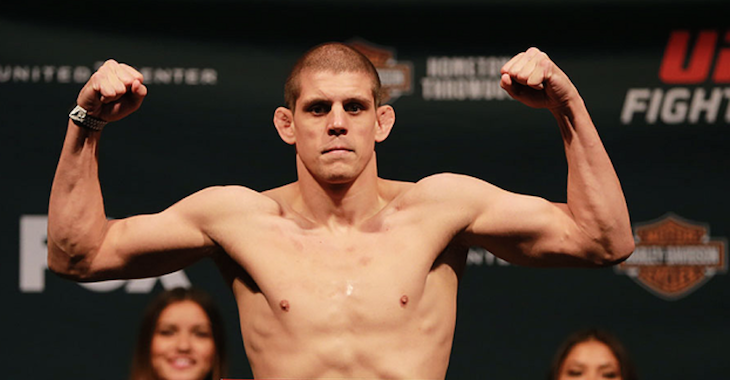 On January 15th, the UFC will return to Phoenix, Arizona. The card will be topped by a battle between rising Mexican featherweight Yair Rodriguez, and our very own BJ Penn, who will be returning after more than two years away from the sport.

Joe Lauzon will meet Marcin Held in a lightweight bout and Jussier da Silva will take on Sergio Pettis in a flyweight contest.

Also, a crucial fight has been added as Bryan Caraway is set to take on Jimmie Rivera in a pivotal collision of top-10 bantamweights. After being “ducked” by Cody Garbrandt and John Lineker, this is a fight Caraway asked for specifically, and it sounds like he’ll get his wish. The UFC event page has Caraway vs. Rivera listed but not officially announced as the co-main event.

When we last saw Caraway in action, he braved a tough first round against the then undefeated Aljamain Sterling to walk away with a unanimous decision win. With this win, Caraway improved to 4-1 in his last five, having sandwiched a loss to Raphael Assuncao between defeats of Johnny Bedford, Erik Perez, Eddie Wineland, and Sterling. He’s currently 21-7 in sum. Rivera, meanwhile, is on a ridiculous 19-fight win-streak, having not lost since his second pro fight. His four most recent wins have all occurred in the UFC’s Octagon, where he knocked out Marcus Brimage in his debut, before decisioning Pedro Munhoz, Iuri Alcantara, and most recently Urijah Faber. He’s currently 20-1 overall.

Given that Caraway and Rivera hold the number six and four spots in the UFC bantamweight rankings respectively, this one hast title contendership implications written all over it.

The next bantamweight title fight will see undefeated challenger Cody Garbrandt attempt to upset dominant champion Dominick Cruz in the co-main event of UFC 207. The next shot at the winner of this bout will likely go to the winner of TJ Dillashaw and John Lineker’s UFC 207 scrap, but the next shot thereafter could well go to the Caraway vs. Rivera victor.

Who do you think about the UFC Fight Night 103 card? Sound off, PENN Nation!