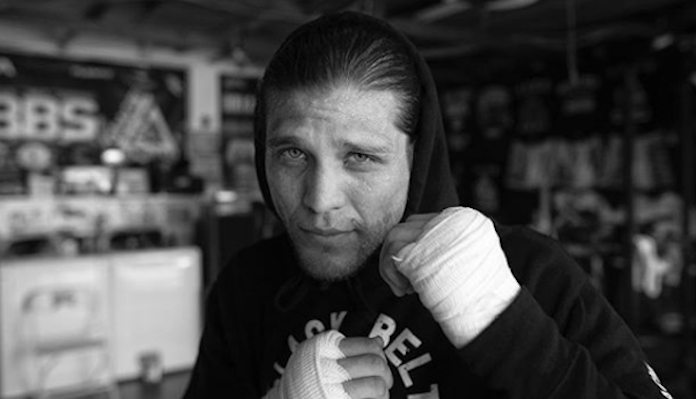 After knocking out Frankie Edgar in the co-main event of UFC 222 last weekend, Brian Ortega now has his crosshairs locked on UFC featherweight champion Max Holloway. It’s a monumental challenge, to say the least, but it isn’t stopping Ortega from looking further into the future. On a recent episode of theUFC Unfiltered podcast, the surging featherweight contender shared grand plans to move to the lightweight division down the road.

That being said, Ortega isn’t going to be heading North to 155 pounds for any old challenge. It’s going to take something truly special to coax him up to this heavier division.

“I’ve definitely thought about it,” Ortega said (h/t MMAMania). “My goal is if I’m successful against Max Holloway, then I’m looking at some opportunities and things in the 155-pound division. We need the perfect match up, not just a regular match. I really want to give [the fans] a war, something crazy, something big.”

This, of course, is an exciting possibility, as there’s a near limitless crop of exciting matchups for Ortega in the lightweight division, from Tony Ferguson, to Kevin Lee, to Eddie Alvarez. Then again, this all seems to hinge on his getting by Holloway, which is certainly no certainty.

With his knockout win over the notoriously durable Frankie Edgar, Ortega improved to a flawless 14-0. His last six wins have occurred in the UFC’s Octagon, where he’s taken out top flight foes in Thiago Tavares, Diego Brandao, Clay Guida, Renato Moicano, Cub Swanson, and now Edgar. Not one of these men survived to the final bell with Ortega.

While no date has been given for Ortega’s bout with Holloway just yet, UFC 227 has been mentioned as a possibility. It’s also been stated that this card could occur in Holloway’s native Hawaii. Time will tell.

How do you think Brian Ortega would fair in the perilous UFC lightweight division?