Home » MMA News » Bellator » Photo | Yoel Romero in phenomenal shape ahead of B... 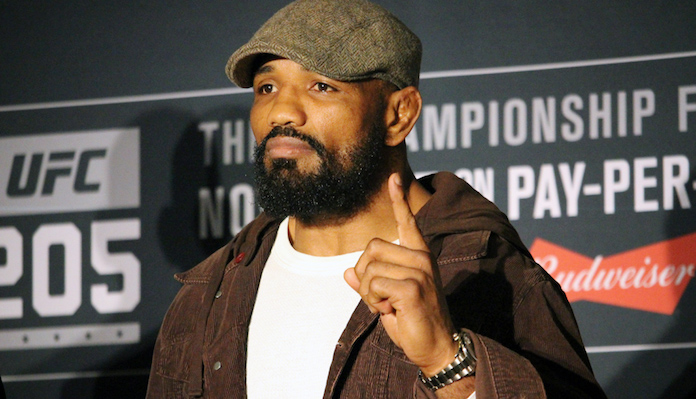 Yoel Romero looks to be in phenomenal shape ahead of his upcoming Bellator Light Heavyweight World Grand Prix fight against Anthony Johnson.

Romero was a surprise cut by the UFC late last year and he soon afterward he signed a free-agent deal with Bellator. The organization last week announced that it will be holding an eight-man 205lbs tournament in 2021 and Romero will be a part of it. Though he competed as a middleweight in the UFC, Romero will be moving back up to light heavyweight in Bellator, a weight class that he used to fight at in Strikeforce. The hope is that the 43-year-old Cuban will have a fuller tank of gas now that he doesn’t have to cut a ton of weight at 205lbs.

With Romero’s upcoming quarterfinal light heavyweight fight against Johnson coming up next month, we have now seen the first photos of the 205lbs version of the Cuban superstar. Check out the picture that Romero shares of himself on his social media where he appears to be in phenomenal shape.

Romero (13-5) enters Bellator on a three-fight losing skid, but you have to remember that all three of his losses were competitive fights with elite middleweights in Israel Adesanya, Paulo Costa, and Robert Whittaker. While he didn’t get his hand raised in any of those bouts, the fact he was able to go the distance and make it competitive with three quality fighters like them is actually somewhat impressive considering those are three of the best at 185.

It will be interesting to see how Romero performs after moving up to 205lbs to take on Johnson and the rest of the Bellator light heavyweight fighters. According to the oddsmakers, he’s one of the favorites to take home the whole tournament. He looks in great shape, now let’s see how he does in the cage.