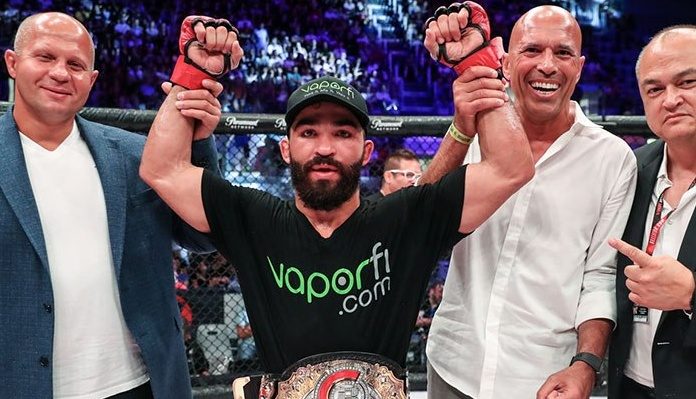 Patricio Freire now owns the Bellator featherweight and lightweight titles. In accomplishing this historic feat, he solidified his rep as one of the sport’s greatest fighters, regardless of promotion.

Given Freire’s status as one of the best fighters on earth, many fans have wondered how he might fair in the UFC, namely against UFC featherweight champion Max Holloway.

Well, here’s what the man himself thinks.

“I’m the best featherweight in the world, and I have been for a while,” Freire told MMA Junkie. “I’d beat him. That’s a fact. Like I was certain I’d beat Michael Chandler, I am absolutely certain I’d beat Max Holloway.”

Patricio Freire continued, rating Holloway’s skills. He believes much of the UFC champ’s success can be attributed to his physical tools, and that he himself has the skillset to neutralize those traits.

“For me, he’s the same Max Holloway who fought Conor McGregor – and who lost to Conor McGregor,” Freire said. “For me, he’s that same guy, he hasn’t changed much. However, he’s very well-rounded. He’s very tall, and he utilizes his reach very well. And his boxing is very sharp. So, fighters haven’t been able to match him technically. He knocked Jose Aldo out twice with pure boxing. Speaking as a boxer, he managed to paralyze Aldo with that.

“Jose Aldo has always been, for a long time, very fast and very strong, so he was able to have medium technique – not excellent, but good – and managed to stop the other guys for a long time due to his speed and strength, mixed with the technique. Max Holloway, he isn’t a strong guy, but he’s a durable guy, with above-average technique.

“That’s why he’s able to dominate. As soon as he meets someone who matches his technique and who has the durability to hold him off until the end, he’s going to have a problem. And I have power, strength, endurance. I have everything that he doesn’t want.”

What do you think of these comments from Patricio Freire? Do you think he’s got the skillset to end Max Holloway’s ridiculous streak in the featherweight division?