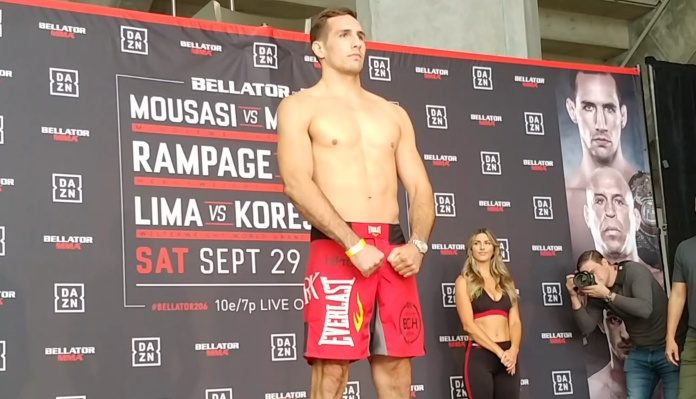 Shortly after battling Jon Fitch to a draw in the main event of Bellator 220, Bellator welterweight champ Rory MacDonald made some comments that cast doubt on his future as a fighter.

Most notably, he suggested that he no longer has the desire to hurt people — certainly an issue for those who make their living fighting in a cage.

“I feel like God has really called me the last little while,” MacDonald said post-fight (transcript via MMA Mania). “I don’t know. He’s changed my spirit, changed my heart. It takes a certain spirit to come in here and put a man through pain. I don’t know if I have that same drive to hurt people anymore. I don’t know what it is. It’s confusing, but I know the Lord has something in store for me. He was speaking to me in here tonight. I don’t know. It’s a different feeling.

“I have to get out of here and re-evaluate. We will see what happens. As far as tonight, it was a mix of emotions in there I landed some good stuff in there, but it was something in there.”

These comments notwithstanding, Rory MacDonald is now scheduled to defend his welterweight strap against Neiman Gracie in the second round of the Bellator Welterweight Grand Prix.

Gracie has caught wind of these comments from his future opponent MacDonald, and he doesn’t seem too impressed by them.

“It’s up to him (whether he wants to fight),” Gracie told MMA Junkie post-fight. “I think he still wants to hurt people. I saw him trying to hurt Fitch pretty bad tonight. I think it’s bulls**t.”

What do you make of the recent comments from Rory MacDonald?