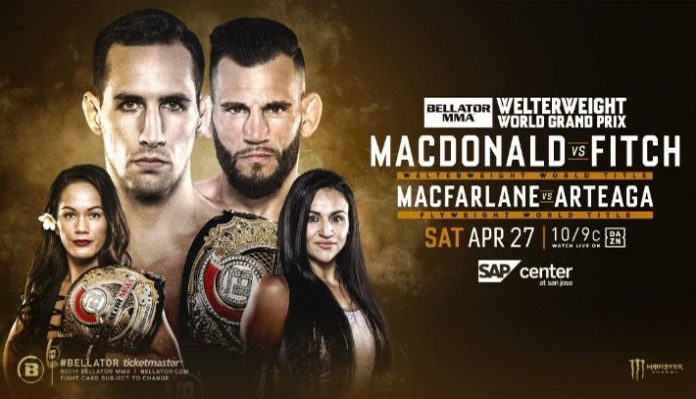 The Ultimate Fighting Championship (UFC) isn’t the only show streaming live Saturday night as Bellator 220 will go head to head with the MMA juggernaut.

While Bellator has a habit of filling up the undercard with local fighters to help move ticket sales, that often times affects the quality of fights the fans get. There’s no denying the strength of the five-fight main card that will stream live via DAZN. However, the prelims fall a bit short of what one would expect from a card of this magnitude.

That being said, there are plenty of good reasons to be tuning in this weekend. Let’s take a look at more reasons to watch Bellator 220.

Having personally had a chance to speak with both men ahead of their anticipated rematch, I can tell you both Phil Davis and Liam McGeary are supremely confident they will get their hand raised at the SAP Center.

Davis wants to do the same thing he did last time he met McGeary back in November of 2016. Although both men have changed substantially since then, “Mr. Wonderful” believes he can recreate his gameplan.

Since leaving the East coast and heading West to California, McGeary has been adding to his already impressive arsenal. The British striker has a solid ground game but has been working on his takedown defense (as one might expect) lately.

After a rough start to his Bellator career, Benson Henderson looks like he has figured things out. The former UFC lightweight champion has won two straight after losing three of his first four fights under the Bellator banner.

Henderson, 35 will have his hands full on Saturday night as he takes on Adam Piccolotti. “The Bomb” is a true Bellator MMA veteran. Having largely cut his teeth in the promotion, Piccolotti will make his 10th walk to the Bellator cage this weekend.

Ilima-Lei Macfarlane will make her third title defense against Veta Arteaga in the Bellator 220 co-main event on Saturday night.

Arteaga presents a difficult challenge for the champion as she is a pressure fighter who never takes a step backward. Arteaga has decent power, good wrestling, and an iron will.

As for MacFarlane, he 29-year-old champion is yet to taste defeat in her professional career and has only really faced adversity a handful of times in her Bellator career. If you are a fan of high level grappling and fast-paced grappling transitions then this is the fight for you.

Bellator’s Welterweight Grand Prix will close out the first round of competition with the reigning 170-pound champ, Rory MacDonald defending his belt against former World Series of Fighting champ Jon Fitch.

Although he lost in his last outing to Gegard Mousasi in his attempt to become a double-champ, MacDonald is back fighting in the division he currently sits atop of. This will be the “Red King’s” first title defense.

Fitch has won five straight fights heading into this weekend. He most recently defeated Paul Daley in his Bellator debut last May. A win over MacDonald would set up a dream grappling matchup for Fitch against Neiman Gracie.