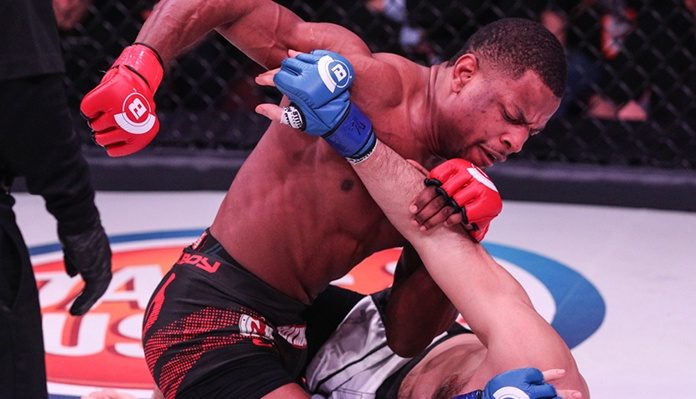 Bellator 204 is just a month away and the full card is starting to shape up.

BJPenn.com’s own Drake Riggs confirmed today that a showdown between featherweight prospects Tywan Claxton and Cris “Sunshine” Williams has been added to the main card which takes place in Sioux Falls, South Dakota.

Can confirm from sources that Cris Williams will be taking on Tywan Claxton at #Bellator204 on August 17th. Bout to be featured on the main card.

Can confirm from sources that Cris Williams will be taking on Tywan Claxton at #Bellator204 on August 17th. Bout to be featured on the main card.

Undefeated in his young career, the 25-year old Claxton has already become one of Bellator’s hottest prospects. Going 6-0 before turning pro, Bellator picked him up and he has already won his first two pro bouts impressively.

The first being in highlight reel fashion with his flying knee knockout of Johnny Bonilla-Bowman.

Standing opposite of Claxton will be the always entertaining Gracie-Barra product, Sunshine Williams who will be looking to rebound off of his first career loss in 11 fights (7 amateur, 5 pro).

Williams has made his name off of being very savvy with his submission skills as three of his four pro wins have ended that way. Six of his seven amateur bouts also ended via submission.

Having been calling for a fight with James Gallagher in the past, surely Williams will have something to say in his post-fight interview with a win come August 17th.

Check out the rest of the Bellator 204 lineup as it currently stands below: