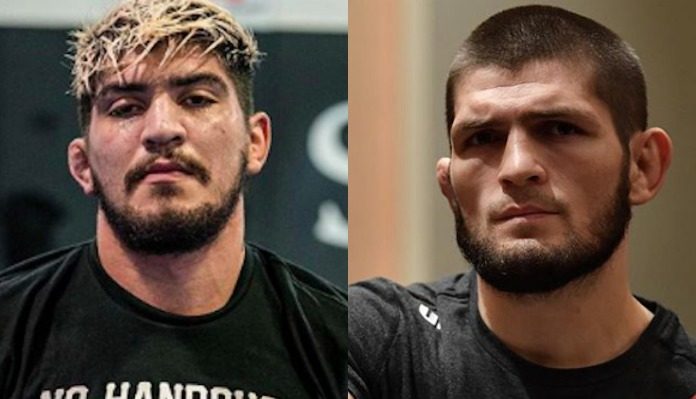 Shortly after Khabib Nurmagomedov defeated Conor McGregor by rear-naked choke in the main event of UFC 229 in October, he leapt over the side of the Octagon and dive bombed McGregor’s friend and training partner Dillon Danis.

Ever since, Khabib Nurmagomedov and Dillon Danis have had plenty to say about each other on social media.

The latest shot in this ongoing skirmish was fired by Danis, who took to Instagram to break down his scuffle with Nurmagomedov, and call the Russian champion and his team ‘proper p***ies’.

See what Danis had to say below;

“[Khabib Nurmagomedov] You ate a beautiful timed counter right hand as you landed plus absorbed multiple uppercuts from the clinch, to stop me from lighting you up like a Christmas tree you proceeded to run away,” Dillon Danis wrote in his Instagram post. “While I am being restrained by law enforcement your teammates come from behind and rabbit punch me a cowards move proper pussies. Who’s the honorable team?”

Earlier this week, Khabib Nurmagomedov and Conor McGregor were both disciplined by the Nevada State Athletic Commission (NSAC) for their role in this frenzied post-fight brawl.

Danis, for reasons that are still unclear, has not yet been disciplined — though he is still suspended by the commission.

What do you think of this latest shot from Dillon Danis?