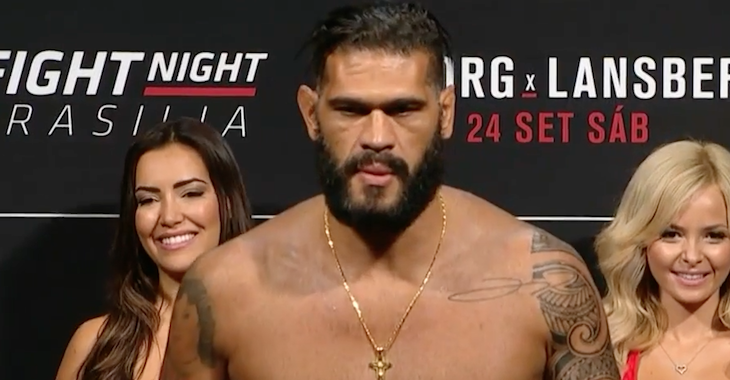 UFC heavyweight Antonio ‘Bigfoot’ Silva is undoubtably one of the most recognizable heavyweights in MMA. With over 11 years of experience as a professional, and notable wins over MMA icon Fedor Emelianenko, former UFC heavyweight champion Andrei Arlovski, and MMA veteran Alistair Overeem to name just a few, Bigfoot is a very well known fighter in the MMA world.

Unfortunately however, Silva could very well find himself as a free agent following his 1st round KO loss to Roy Nelson on the main card of ‘UFC Brasilia’ this past weekend. The loss to Nelson made it 3-straight for ‘Bigfoot’ and dropped his record to 1-4 in his last 5. While Silva’s manager believes that his client will likely get his walking papers from the UFC, Rizin Fighting Federation Senior Vice President Jerry Millen has revealed that the promotion is interested in reaching a deal with the veteran heavyweight:

“As always we are looking for fighters with International appeal and with great character and Bigfoot has both,” Jerry Millen, Senior Vice President of RIZIN told MMAmania.com. “He has had a difficult time in his last few outings but he is a professional and you can NEVER count out a professional.”

“In RIZIN we want the fans to be entertained as they were in our Sept. 25th event,” Millen continued. “If Bigfoot is released and has interest in fighting in RIZIN we are always open to talking with fighters and their management.”

The promotion, which recently just held the first round of its World Grand-Prix event in Saitama, Japan, has been scooping up many fighters who were popular during the days of Pride FC, including Mirko Cro Cop, Fedor Emelianenko, and Wanderlei Silva to name just a few.

With the second round of their World Grand-Prix not set to take place until December 29th, the promotion could very well be looking to sign Silva sooner rather than later, and book him for a fight on their New Years Eve card on December 31st.

With the promotion expressing interest in Silva, one also cannot help but ignore the possibility of the promotion looking to book a rematch between Silva and Fedor Emelianenko.