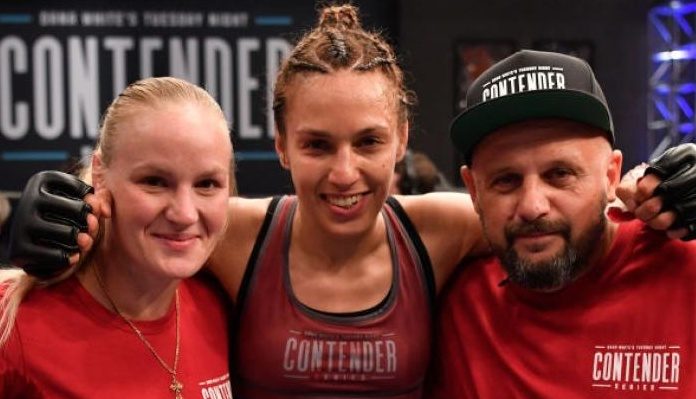 2018 could potentially be a pretty big year for the Shevchenko family as little sister Valentina looks to capture UFC gold this Saturday while big sister Antonina (6-0) looks to make a successful UFC debut.

The UFC’s first pair of fighting sisters in the organization’s history is officially the Shevchenko’s. And with their incredible Muay Thai backgrounds, success is more than expected.

Antonina has actually been competing more frequently and for longer when it comes specifically to Muay Thai but decided to make a full transition over to MMA in 2017.

Winning her way into the UFC on the most recent season of Dana White’s Tuesday Night Contender Series, Shevchenko defeated Jaymee Nievara with relative ease on route to a second-round TKO.

Her UFC debut has now been set as she will take on Ashlee Evans-Smith (6-3) at The Ultimate Fighter 28 Finale on November 30 reports ESPN.

Evans-Smith originally made her name by defeating Fallon Fox by TKO in her second pro bout. She has since gone on to find UFC success where she has earned wins over the likes of Marion Reneau and Bec Rawlings.

With her career having been majorly at bantamweight, Evans-Smith decided to drop down to 125-pounds for her last time out with Rawlings and it obviously didn’t seem to be the worst decision as she got the nod. She’ll now look to get back to back wins for the first time since 2016.

Overall MMA experience probably favors Evans-Smith in this matchup which makes it an interesting choice for Shevchenko’s debut and one that shows how much the UFC believes in her.

And why not? She is already going to be one of the best female strikers in all of the UFC along with her sister. It just depends on how well she can display her overall MMA skillset.