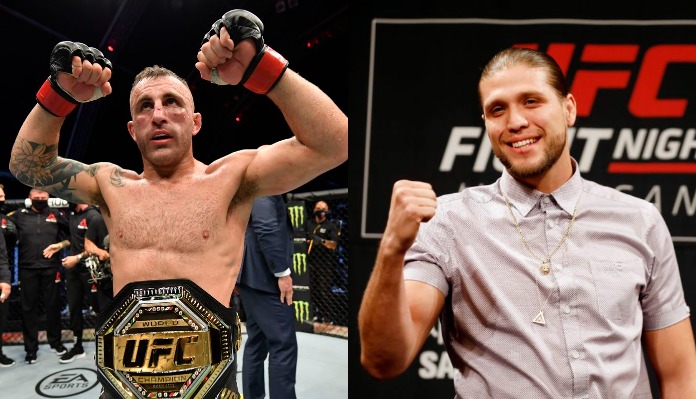 The TUF coaches for season 29 have been revealed and it will be Alexander Volkanovski and Brian Ortega.

Ever since UFC president, Dana White announced TUF would be coming back, many were interested in seeing who the coaches would be. It was rumored to be Colby Covington and Jorge Masvidal, but “Gamebred” got a title shot so that was off. Now, according to ESPN’s Brett Okamoto, Volkanovski and Ortega will coach the return season of TUF. The show will feature bantamweights and middleweights.

“The Ultimate Fighter reality series will return on ESPN in 2021, and Alexander Volkanovski and Brian Ortega will serve as opposing coaches per Dana White,” Okamoto reported on Instagram. “No official date on their title fight, which was postponed last month after Volkanovski tested positive for Covid-19, but it will take place at the conclusion of the season.”

It is great to see the UFC finally get the coaches for TUF 29. It will be interesting to see how Volkanovski and Ortega are as coaches. But, the two have a wealth of knowledge it will add some hype to their upcoming featherweight title fight.

Of course, Volkanovski and Ortega were supposed to fight this past weekend at UFC 260. Unfortunately, Volkanovski tested positive for COVID-19 and the fight was postponed which allowed them to be the TUF coaches. However, the date of the fight is not certain and depending on when it is, it will hold up the featherweight division which has a ton of contenders ready to fight for the belt.

Alexander Volkanovski is coming off his back-to-back fights over Max Holloway to win and defend his belt. He also holds notable wins over Jose Aldo and Chad Mendes.

Brian Ortega, meanwhile, returned in a big way with a dominant decision win over Korean Zombie in October. It was his first fight since he lost to Holloway for the belt at UFC 231.

What do you think of Alexander Volkanovski and Brian Ortega as the TUF 29 coaches?