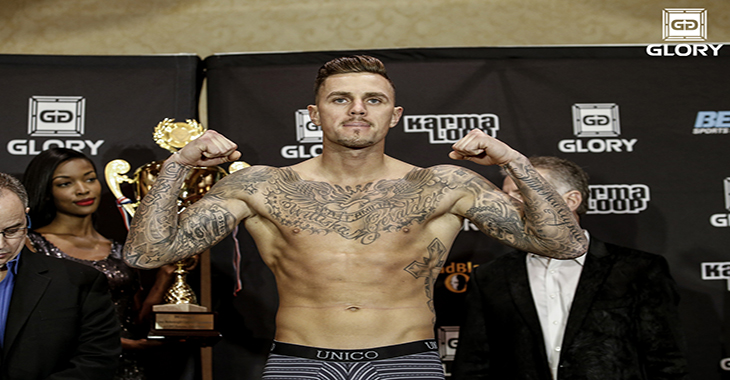 Raymond Daniels def. Jonatan Oliveira by way of TKO (Body Kick) 2:15 of Round 2
Daniels Advanced to the Finals of the Welterweight Tournament…

If you get knocked down three times in a GLORY one night tournament bout, you lose by way of technical knockout. Raymond Daniels was able to knock Jonathan Oliveira down three times before the end of the second round and picked up the win in dominant fashion. Oliveira had no chance in winning this bout after an abysmal first round and his only hope of making it to the final bell was avoiding contact completely. Daniels was able to close the distance with his unusual kicks and knocked Oliveira down twice more in the second round to pick up the victory.

Nieky Holzken vs. Alexander Stetsurenko by way of Unanimous Decision (29-28 x 3)
Holzken Picked Up Two Rounds and Scored His Way to the Finals…

Even though the total numbers of punches landed were even, it was Nieky Holzken who had his hands raised thanks to his knees and kicks. Holzken blasted Stetsurenko’s lead leg with leg kicks throughout the fight and it slowed action down. Holzken dictated where the fight went, but Stetsurenko did a fantastic job at countering. Stetsurenko did not land the big strike or combination he needed to win the fight though, and he will be watching he finals from backstage.

Joe Schilling def. Robert Thomas by way of Unanimous Decision (30-26 x 3)
Schilling May Get Another Shot at the Title…

To nobody’s surprise, Schilling blasted through Thomas by way of unanimous decision. Schilling knocked Thomas down with a nice straight right in the final minute of the third round and it looked like Thomas would be down for the count. Thomas showed great resiliency, however, and made it to the final bell.

Daniels is used to dictating where the action goes, but tonight, Holzken controlled every single aspect of this fight. Daniels was cut off and could not throw his flashy kicks which restricted him from landing anything significant. Holzken corned Daniels early and often and dropped him once in every round. Daniels got back to his feet and tried to continue fighting, but he was dropped one final time in the final round with a knee to the skull. Nieky Holzken is now the number one welterweight in the world only behind the champion.

Verhoeven stood with his hand raised at the end of the night with a belt around his waist and Mike Tyson by his side. If that doesn’t scream “HEAVYWEIGHT CHAMPION”, then I don’t know what does. Verhoeven and Zimmerman brawled hard in the opening round and they both landed their fair share of punches and kicks. Zimmerman threw a wild kick in the second and landed on his foot wrong, which caused him to fall on the mat. Zimmerman clutched his knee as the doctor checked in on him. Zimmerman could not stand back up after two minutes of recovery allowance and the fight was waved off.