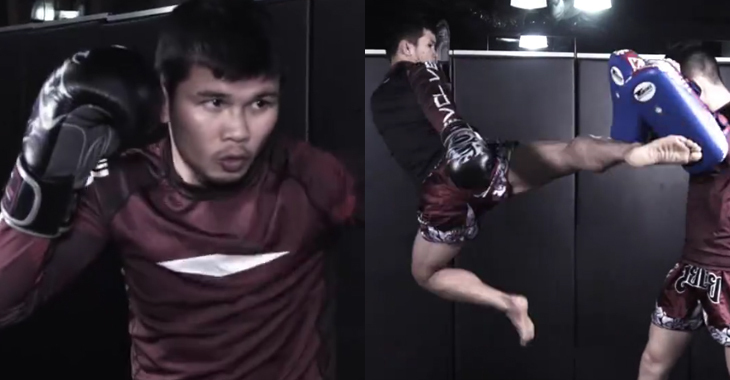 When utilized in the correct manner, Muay Thai can prove to be an essential skill in combat. Mastering the martial art means continuous practice and perfection. As such, a practitioner must possess unwavering dedication and resolve. He or she must be willing to pay attention to the smallest details in technique.

In the following clip, Muay Thai world champion Nong-O Gaiyanghadao from the EVOLVE Fight Team shows us how to execute a jumping roundhouse kick. How to throw a jumping roundhouse kick

In order to effectively throw a jumping roundhouse kick, you need to set up a series of combinations. In this demonstration, we will begin with a jab. This is followed by a push to find the correct range for the kick. Immediately launch the jumping kick after the push.

When you throw the jumping kick, rotate your hips and swing your right hand down to generate power. Remember to keep your left hand up in guard. Return your kicking leg to the same trajectory after the kick.

Things to remember in this technique

This technique requires a setup, it’s not usually thrown alone. Start off with your favorite combo, or maybe even something as basic as a jab. After your combination, the push comes next. This move is essential to the jumping roundhouse kick. Not only does it create enough space for you to actually throw the kick. But also temporarily stuns an opponent and catches him with his guard down.

When you jump, use both legs and bend your knees which will give you lots of explosive power. In one swift motion, execute the jumping roundhouse kick. Do it with authority, and with the goal of knocking the other guy out. Don’t hold back and everything should be perfect.