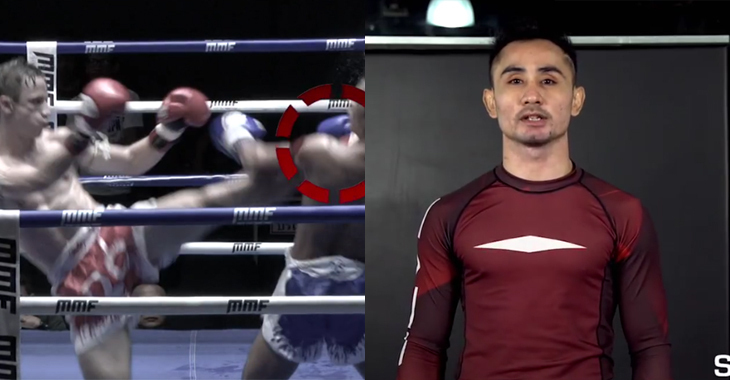 Muay Thai, the art of eight limbs, is one the world’s most effective martial arts. It is an essential combat skill that is both effective and highly technical. Mastering Muay Thai means you have to put in the hours and focus on proper execution. Everyone who takes it seriously has to be focused and dedicated to making sure all techniques are correct. There are a lot of small details that we need to pay attention to. How to execute the scissor kick knockout

The fight begins with both fighters patiently testing each other out at a calm pace. Throughout the round, it is clear to see that Meyer came with a gameplan. The main attack that he uses throughout the round is his lead leg kick. With Meyer and Petsuphan both being southpaws, their lead legs line up.

The knockout blow is up next

The action continues throughout the second round. Petsuphan has some success in keeping Meyer at bay, but Meyer is just too crafty and soon realizes there is an opening in Petsuphan’s defense.

Meyer notices that Petsuphan drop his guard when he attacks the lead leg. That’s Meyer’s cue, and he goes right after the lead leg to force the guard to drop. This is when the switch kick is launched and lands right on Petsuphan’s jaw. Perfect recognition by Meyer, and it’s lights out.