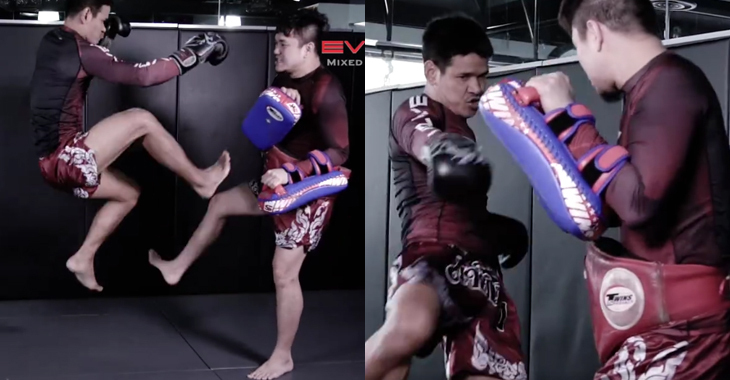 Muay Thai is such a beautiful thing — the fluidity of the movements, the power of the strikes, the tenacity of the discipline. When used in the right way, Muay Thai could be all that you need to be successful in combat. When the Thais developed this deadly martial art, they had one goal in mind, and that was to emerge victorious in any encounter.

While most people are familiar with the basic kicks, punches, knees and elbows in Muay Thai, there also exists other, more creative striking techniques. Take this video that Evolve Vacation shares with us today for example. In the following clip, one of the world-class instructors at Evolve show us how to execute an insane jumping switch push kick. It’s different from a regular push kick, which is used primarily just to create distance between a fighter and his opponent. This jumping switch push kick is so powerful, it can be used to land a knockout blow.

To set up the move, begin with the right kick, followed by a left push kick to create enough range to throw the jumping switch push kick. When your opponent is charging back at you, jump with your left knee forward. Switch to your right leg in mid-air and use that momentum to throw a right push kick with an even greater force.

Catch your opponent off guard with an explosive jumping switch push kick!https://evolve-vacation.com

It is important to also return your foot back to its original position after the kick. Executing the jumping switch push kick requires perfect timing and a great deal of balance.

Of course, never neglect your defense so keep your left hand raised up in guard. Swing your right hand down to maintain balance, and push your hips forward to generate additional power behind the strike.

Mastering this kick could one day mean the difference between victory and defeat. Nevertheless, it is a great move to have in the arsenal. And plus it looks really, really cool.