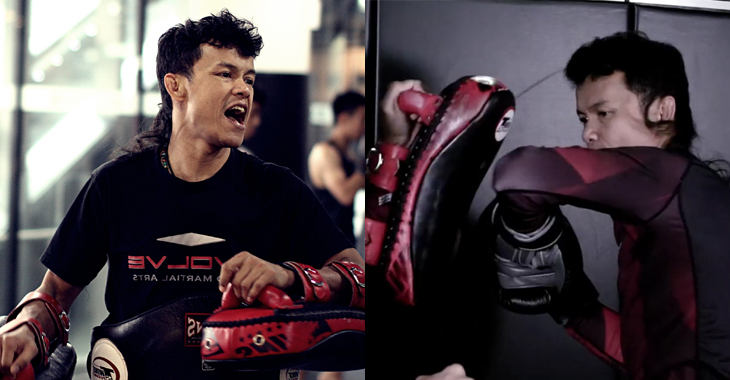 The last time we saw Kru Orono, he was teaching us how to throw a proper roundhouse kick. Another one of the many common weapons in Muay Thai is the elbow strike. This time, Kru Orono is out to teach us how to throw this sick Muay Thai elbow.

Orono Wor Petchpun is a 3-time Lumpinee Stadium Muay Thai champion and one of the world-class instructors at Evolve Mixed Martial Arts in Singapore. He finished his professional Muay Thai career with a record of 119-35-3. Among his many impressive victories include wins over the legendary Saenchai Sor Kingstar and Buakaw Por Pramuk. He even holds the distinction of knocking out WMC World Champion Yodsaenklai Fairtex twice.

When executed correctly, a Muay Thai elbow strike can come completely out of the blue and stun an opponent. Once an opponent is stunned of course, then we can follow up with some more damaging blows. Sometimes these Muay Thai elbows can be so powerful, it can even stop an opponent instantly on impact.

Check out this amazing video of Kru Orono teaching us a proper elbow strike.

WATCH: How To Throw A Devastating Muay Thai Elbow Strike!https://evolve-vacation.com

Before you throw the elbow, first you have to setup the shot. Take one step forward with the lead foot, then bend your rear forearm and keep the elbow down. Next, lift the elbow up to eye level. Don’t forget your defense, your lead hand needs to come up and cover your face and chin on the other side.

Finally, unleash the elbow strike, aiming for your opponent’s head. Make sure to turn your hips into the shot for maximum power. Pivot the rear foot towards your opponent to transfer your weight into the strike. Do this in one smooth motion and you have yourself a knockout blow.

These days Kru Orono spends his life imparting his knowledge to students at Evolve MMA in Singapore where he continues to do what he does best and practice the sport that he loves. He has worked with some of the world’s best fighters, including Rafael Dos Anjos, Ben Askren, Shinya Aoki and Angela Lee.