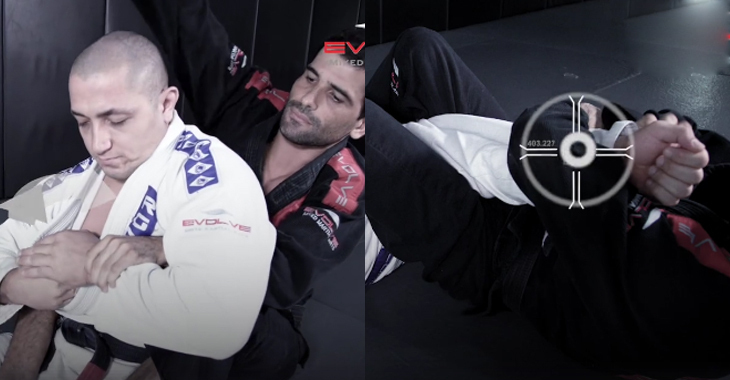 Brazilian Jiu-Jitsu can be very intricate at times. While some fighters just study the moves diligently on Youtube, to truly learn the technique you have to take direction from the masters. The only way to master Brazilian Jiu-Jitsu is by enrolling in a class and learning the art. When a fighter possesses solid Brazilian Jiu-Jitsu skills, he has a distinct advantage over any opponent.

When used the right way, Brazilian Jiu-Jitsu could spell the difference between victory or defeat in any fight. The beauty of this martial art lies in its fluidity of movement and its ability to control an opponent’s position. Much like wrestling, Brazilian Jiu-Jitsu makes use of a fighter’s own leverage in order to set traps and force an opponent to make a mistake. In this video that Evolve Vacation shares with us today, Brazilian Jiu-Jitsu superstar champion and member of the Evolve Fight Team, Eduardo Novaes demonstrates how to execute an armbar from the back.

Three-time Brazilian Jiu-Jitsu world champion Novaes has over 20 years of experience on the mat. He is a third degree BJJ black belt under Master Elcio Figueiredo. He also holds a silver medal at the Brazilian Nationals and is a three-time Sao Paolo State BJJ Champion.

So when he demonstrates how to do a certain technique, it would be best that we listen carefully. Pulling off an armbar from the back is a great move to have in the arsenal.

WATCH: How to do an arm bar from the back!https://evolve-vacation.com

Novaes says that once you have taken the back, start things off by taking a nice and tight seatbelt. Novaes then tries to execute a collar choke, anticipating his opponent’s defense by holding his wrist. As soon as the opponent makes that mistake, Novaes then grabs his foe’s left wrist, frees his other arm and passes to the other side of the opponent’s head.

Next step is to change grip and take more of like a kimura grip. Post the right foot to the side, put the left leg across the belly, then roll and pass the right leg over the opponent’s head. Now extend the arm and complete the armbar.

It’s a complex series of moves but once you get the hang of it, it’s an amazing thing to have in your back pocket.