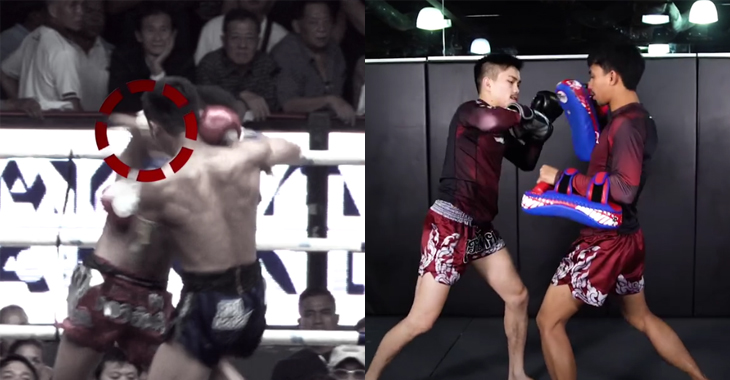 This article/video was first published on Evolve MMA.

Since all mixed martial arts bouts start on the feet, striking is one of the most important aspects of the sport. In fact, contrary to popular belief, an entire MMA bout can go the duration without ever going to the ground. That makes striking probably the most important part of fighting.

When Pet-U-Tong fought Kaimukkao, it was a closely contested match-up until the final sequence, when Kaimukkao was laid out care of a sick Pet-U-Tong elbow. Evolve MMA has the fight breakdown and that incredible finish for readers today. For most MMA fans, Muay Thai is simply a small part of the overall fight game. There are vicious knees and elbows, and then there are flashy high kicks. But that may be the extent of what fans know about Muay Thai. The actual fighting discipline and the sport whose rules govern it however, is far more intricate.

For instance, the video explains that in Muay Thai, if an opponent lands a clean strike you are obligated to return a strike of your own else be viewed by the judges as loser of that particular striking exchange.

So as a Muay Thai fighter, you can’t just lay back and look to counter. At some point during the fight, you have to become the aggressor. This should make for excellent action-packed sequences that keeps audiences on the edge of their seats.

And just like in the Pet-U-Tong – Kaimukkao battle of attrition, the end can come in an instant.

With his back against the ropes and Kaimukkao attacking relentlessly to get back the favor of the judges, Pet-U-Tong unleashes a devastating right elbow counter that separated Kaimukkao from his senses. It was a quick and abrupt ending to what was an enjoyable matchup of Muay Thai elites.

This fight breakdown sheds light on how the fight progressed until that epic finish. And Evolve MMA provides a pretty in-depth look at how Muay Thai fights unfold. Check it out.