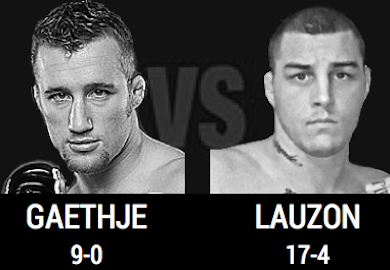 A solid matchup between two aggressive fighters lived up to expectations. Both men came out seining as the undefeated Gaethje landed the better strikes thrown between the two.

Gaethje took control of the bout early and landed horrifying leg kicks on Lauzon who was visibly injured by the strikes as he limped around the cage. Lauzon stood tough but simply wasn’t able to mount any offense without the use of both legs.

In the second round, Gaethje saw an opening on a counter and landed a hard right hook followed by a right uppercut, sending Lauzon crashing to the mat. Another TKO for the surging Gaethje over a game opponent.

Official Decision: Justin Gaethje defeats Dan Lauzon via TKO (strikes) at 1:40 of Round 2.