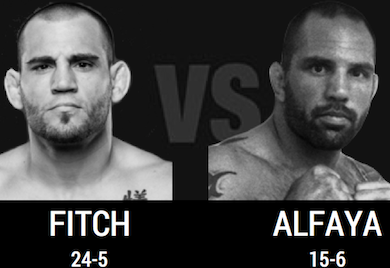 Jon Fitch came in against Marcelo Alfaya to try to quell a losing streak under the WSOF banner.

Alfaya took control of the first round on a seemingly unsuspecting Fitch who was taken down and controlled white Alfaya rode his back for the majority of a one-sided first round.

In the second, Fitch came back to form, sprawling on takedowns and escaping trouble on the ground immediately. Fitch also landed his first takedown of the fight and also opened up on his feet to keep Alfaya at bay.

In the third, an improved boxing game of Fitch dictated the stand-up while Fitch’s physical dominance returned to form. Fitch landed everything he wanted to on the ground and landed his takedowns as well. Fitch couldn’t hold Alfaya down for long but was consistent in his attempts and pulled out a close split decision win.