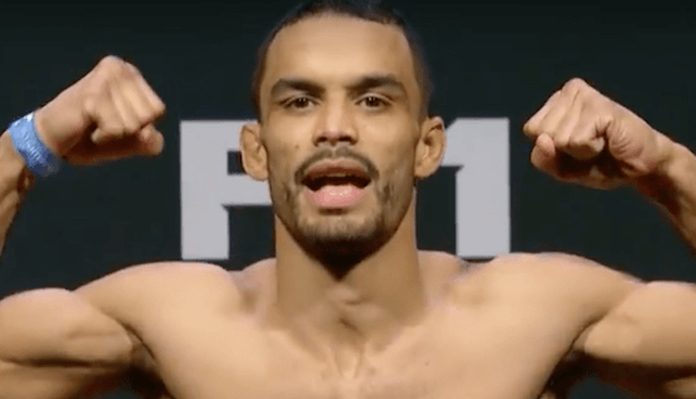 Moraes (23-7-1 MMA) most recently competed back in October on Fight Island where he suffered a devastating second round TKO loss to Cory Sandhagen. Prior to the loss, ‘Magic’ was coming off a split-decision win over Jose Aldo.

Meanwhile, Rob Font (17-4 MMA) will be competing for the first time in exactly a year when he squares off with Marlon Moraes at UFC Vegas 17. Font has earned unanimous decision victories over Sergio Pettis and Ricky Simon in his most previous efforts.

Round one begins and Rob Font comes forward quickly. Marlon Moraers clips him with a hard kick and then immediately takes him down to the canvas. He moves to half guard and then looks to lock up a guillotine choke. Font scrambles and escapes back to his feet. He lands a knee to the body of Moraes, but then ‘Magic’ scoops him up and slams him back down to the floor. Marlon Moraes is working from half guard. He postures up and lands some right hands. Rob Font throws some hammer fists from off of his back. Moraes is staying heavy in top control. Two minutes remain. Font looks to scramble back to his feet and does. Marlon tags him with a right but Font replies with a three-punch combination. Big shots now and Marlon Moraes is badly hurt. Big ground and pound now from Rob Font. This one is done.

Who would you like to see Font fight next following his KO victory over Moraes this evening in Las Vegas? Share your thoughts in the comments section PENN Nation!