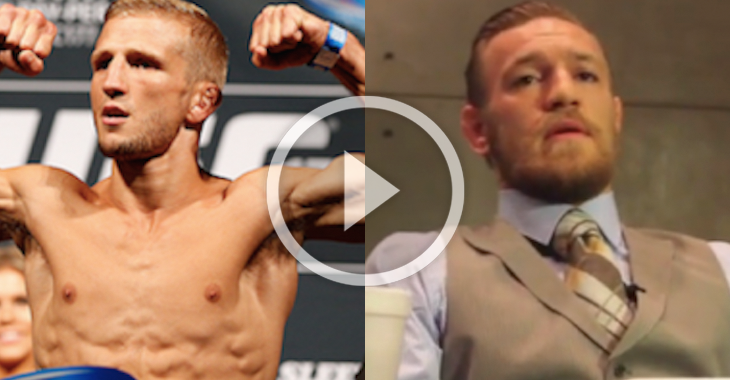 UFC bantamweight champion, T.J. Dillashaw, stopped by Stud Show Radio on Tuesday night to talk about his newly announced/rescheduled fight with Renan Barao, as well as a slew of other MMA topics.

It wouldn’t be a MMA conversation without bringing up Conor McGregor at some point. Check out what Dillashaw had to say about an incident at UFC VIP party that occurred between himself, Urijah Faber and Conor McGregor.

“Conor’s back there and he’s hanging out with Lorenzo [Fertitta]. We like to call Conor ‘Conor Fertitta’ because he’s like Lorenzo’s boy, you know what I mean, always hanging out and they get to fly on his private jet with him, you know, all that good sh*t. Well Lorenzo calls us over to meet some rapper––calls us over to meet him and Conor’s at the table as well hanging out with this guy. He calls Urijah over and as soon as Urijah gets over there Conor instantly starts talking sh*t on him, because he’s heard Urijah call [him] out.

“So he’s bringing up things Urijah has said about him and [saying] how he’s going to smack that ass on his face and all this sh*t.”

“Well I come up behind him and I grab Conor on the shoulder and before I can even say anything he like fu*king hits my hand away from his shoulder and I’m like dude chill the f*ck out. He’s like ‘I heard what you said too, all this sh*t about how I don’t deserve a title shot and I talked my way into this title shot’ and I was like, well in my mind you fu*king did.”

Check out the rest of the story in the clip above: