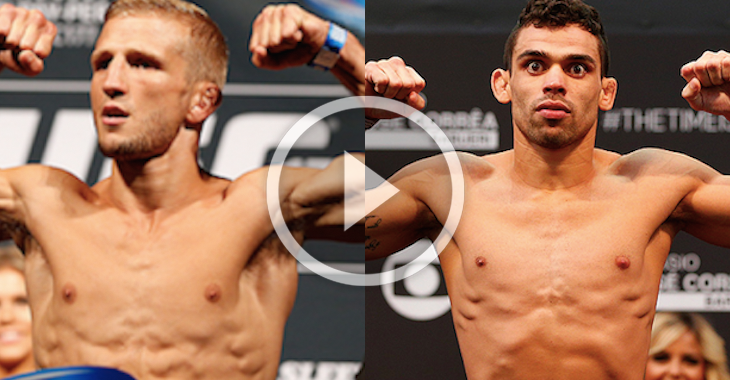 Stud Show Radio (formerly Team Alpha Male Radio) returned with their 54th episode on Tuesday night and boy did they bring the big guns out. Joining hosts Justin Buchholz and Chris Carlino aka Sir Studboy was none other than UFC bantamweight champion T.J. Dillashaw.

Dillashaw joined the guys and of course talked about his newly announced fight, a rescheduling of his second fight with Renan Barao that was set to take place on April 25 before the champ injured a rib wrestling and had to pull out.

Dillashaw expressed his disappointment for having to pull out of the original date and sent out a message to fans on in Instagram a while back when it first happened, apologizing for the situation.

One person he didn’t apologize to? Renan Barao. Here’s why:

“I felt bad having to pull out of my last fight against him, supposed to be fighting April 25, but then I remembered he pulled out 24 hours in advance of our fight, so I didn’t feel so bad anymore. I went on Instagram to say sorry to all the fans for pulling out of the fight, I broke my rib, I feel bad about it, you know, I wanted to fight, and I almost put on there that I was sorry to Barao, that he didn’t get to fight me again and get that chance. But then I remembered he was a little b*tch and pulled out of 24 hours before the fight. So, I took that back.”

Watch the clip above: