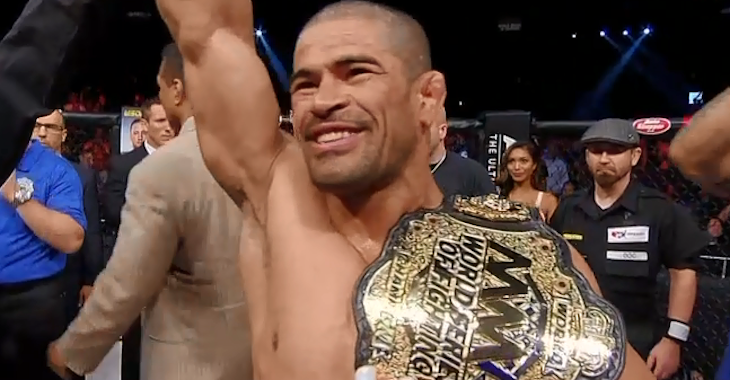 Despite World Series of Fighting officials admitting they saw Rousimar Palhares fight dirty on Saturday night at “WSOF 22”, the welterweight champion still claims he is innocent.

Jake Shields’ attempt to dethrone Palhares of his welterweight champion status was thwarted in the third round. Shields found himself in a tight kimura lock and was given no other choice but to tap out. Palhares did not let go of the hold, however, until one second after the referee had to peel him off of Shields.

“I did not hold his arm (after the tap),” Palhares told MMA Fighting through his translator. “The [referee] said to me before the fight, ‘just go out there, if I put my hand on you, stop.’ And when he put his hand on me, I stopped. I stopped. Sometimes in the fight, it’s hard, it’s difficult to feel something. When it felt it, I [stopped].”

Palhares also gouged the eyes of Shields several times throughout the fight which Shields claims altered how he performed.

“I just protected myself,” Palhares said. “He put his head on my nose. I just put my hand there to protect myself. I did not put my fingers in his eyes. You can see it at the time.”

“I’m so sad, because I’m not a dirty fighter,” Palhares continued. “I just had good position, you know? And sometimes the fight is difficult. If you see the fight, I won in the striking with Jake Shields, I put a lot of hands on him, and I put him in (bad) positions. So when guys say that I’m dirty, I’m so sad about that.”

Do you think Palhares is innocent? Is he trying to convince people he is, or does he really think he did nothing wrong? Share your thoughts in the comment section below!