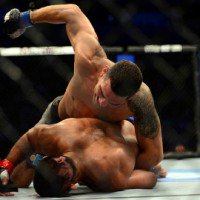 By Evan Stoumbelis
Wednesday night in the UFC on Fuel TV 4 main event, fans saw Chris Weidman face Mark Munoz. The All American Chris Weidman connected with an elbow that sent The Filipino Wrecking Machine Mark Munoz down. Weidman quickly began punching the downed Munoz, who was clearly unconscious. After several punishing blows referee Josh Rosenthal finally stepped in. Talk of Rosenthal’s late stoppage was quick to surface with Dana White taking to twitter saying: “Oh and by the way, horrible late stoppage by the ref. Mark took more shots than he should have. I can’t stand when refs blow it!!!”

The veteran referee Josh Rosenthal spoke about the incident on Sirius XM’s TapouT Radio Show today, saying: “”I came home and I watched it, and I was kind of like you know, if I was sitting here, watching this on the couch, I probably would have been talking smack about myself. I always say accountability is a huge part of the sport, and you are accountable for your actions. I feel like I was just a little slow on the trigger. I don’t want to see guys take unnecessary punishment. It’s a rough sport. Everyone knows what they sign in for, but it’s a millisecond-basis game. You’re making choices right there on the spot, and in the heat of the moment, I felt like I was seeing some stuff. In hindsight, I have to step my game up and make sure I’m on point for the next guys.”