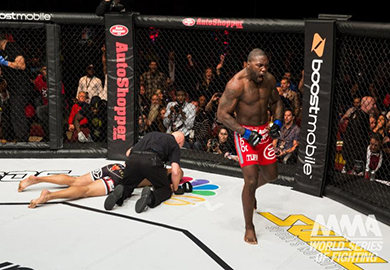 Mike Kyle has not been knocked out since 2010 when he and Antonio Silva met in Strikeforce. Anthony ‘Rumble’ Johnson changed all of that tonight, as he repeatedly put Kyle’s chin to the test.

Although Mike Kyle was doing a decent job at dictating where the action was going, he was not taking advantage of the good positioning he had throughout the short fight. Johnson would fire off punch after punch with his back against the cage and Kyle could not do a thing about it.

‘Rumble’ landed a right hook the put the big man down. Kyle was out before his face slammed on the canvas, but the referee wasn’t near the action to call it off. Johnson still smelled blood and did the right thing: He kept attacking until the referee put a stop to the punishment. Johnson was able to get one bonus shot in before the ref peeled him off.

This is Anthony Johnson’s third consecutive victory inside the decagon.