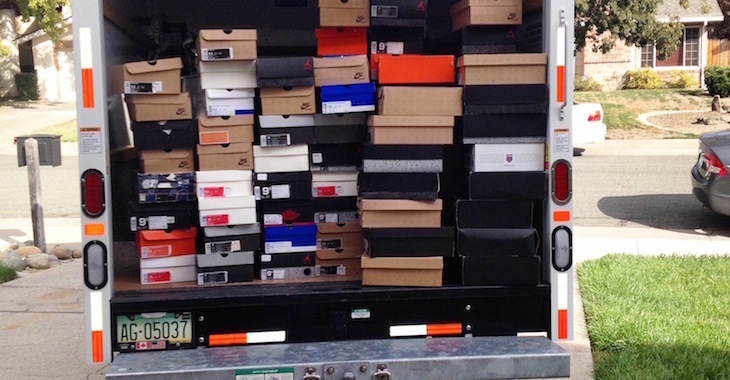 During the conversations fellow TAM member Danny ‘Last Call’ Castillo came up when the guys started talking about his impressive shoe game.

“If he sold all of his shoes he’d be able to feed all of San Francisco. I’m not kidding, every fight check he gets he probably spends half of it on sneakers.”

“He’s the biggest sneaker head in MMA. He was on the cover of Complex magazine, that’s like a sneaker magazine.” N.COM reached out to ‘Last Call’ in hopes of getting the rundown from the MMA sneaker king himself. Castillo had plenty to say when it came to his shoe collection. The UFC lightweight takes pride in his collection and doesn’t think any  fighter can compete with what he’s been able to accumulate, “I’m the biggest sneaker head in the UFC and I’d put my collection up against any fighter in the world,” said Castillo, “[I have] Around 160. I rarely step outside the Nike box but I have a lot of brands.” The Team Alpha Male member literally has a truck-load of shoes.

enthusiasm. He gave us a rundown of his collection, separated by brand:

Although it must be hard for him to choose a favorite, he did mention that the Jordan 11 is up there at the top of his list.

Castillo talked a little about his shopping habits, admitting that it’s not uncommon for him to buy two pairs of the same shoe, “When they retro a pair from my childhood, I usually cop two pair. One to rock, one to stock,” Castillo continued, “I have doubles of some pairs [because]  you never know when Nike will re-release. Plus it’s good for trade.”

If you’ve watched ‘Last Call’ weigh in then you might have seen a few pairs from his collection. It’s a tradition for him t Is Danny Castillo really the sneaker king of MMA? I’d say it’s his title until another fighter can prove otherwise. I mean the guy even has matching socks because, “Sometimes sh*t gets [out of]  hand and I gotta buy matching socks.”