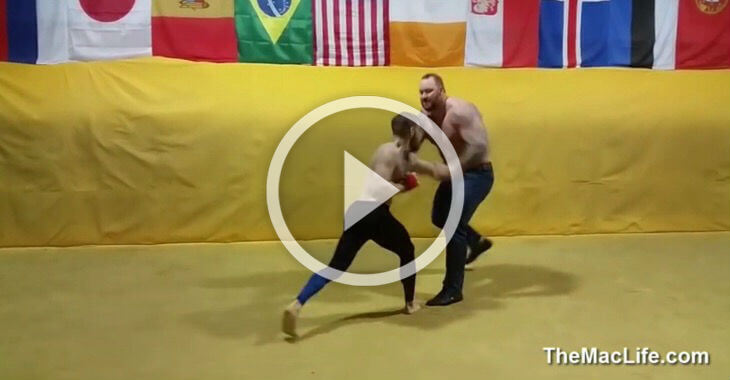 All eyes on Conor McGregor heading into UFC 194. The video above has a just a little over 9 million views, which means not everyone has seen it yet. McGregor also explained how Bjornsson “The Mountain” was only there for a photo shoot and square off, similar to the Bruce Lee – Abdul Jabbar “Game of Death” face off shots.

“It was a lot of fun,” McGregor recently said at a media lunch in Los Angeles promoting UFC 194. MMAJunkie quoted McGregor: “That’s a big man – 6-foot-9, 400 pounds, and I still folded him up. I was hitting him with some shots – I had to hit him with some shots. He was trying to hit me, as well. People say, ‘He was taking it easy.’ He tried to grab me and tried to pull my head off and I defended – freed the head. I was like, this motherf-cker is so big, I have to start smacking him to the body. … But I sunk him good. Not even a ‘Mountain’ can take these shots from me.” McGregor said

McGregor spoke about his sparring session with Bjornsson, who has one the title of  Iceland’s strongest man, two times as the strongest man in Europe, and a top-three finish in the World’s Strongest Man competition for four years running.

Even if it was just a sparring session, the size difference was massive. Bjornsson looked light on his feet for such a beast.  Enjoy the video.