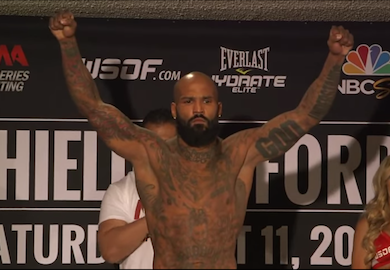 Earlier today it was revealed that Ryan Ford fought Jake Shields in the main event of WSOF 14 with a broken forearm, an injury that was allegedly confirmed just 10 days before his bout with Shields.

The Edmonton Combative Sports Commission is speaking out about the lack of a possibility of Ford fighting with a broken arm, in a statement released to MMAMania they stated:

“He was medically cleared and had no problem at the weigh in. He did knuckle push ups that he could NOT do with a fractured forearm. We have no knowledge of any such injury.”

In case you missed the bout between Ford and Shields, you can rewatch the highlights HERE.