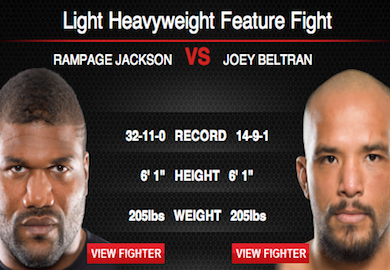 Quinton “Rampage” Jackson is back.

With two men who are notorious for throwing leather with knockout power, not many of their power-punches landed in the first round. Rampage seemed to have listened to Joe Rogan’s criticism by adding leg kicks to his moveset, utilizing them to set up his big hooks. Beltran got the opportunity to press Rampage against the fence and did just that, using knees to the body and close uppercuts to get some points on his side.

The two eventually ended up in the middle of the cage again. This time Rampage made sure he wouldn’t get pressed against the fence again. Rampage seemed to realize that his leg kicks were actually connecting as he started using them as standalone strikes.

As we neared the end of the round, Rampage connected with a monstrous shot that dropped Beltran on all fours. Rampage followed up with another hook that forced the referee to call an end to the fight with only one second left.

Quinton Jackson defeated Joey Beltran by way of KO (Punches) 4:59 of Round 1