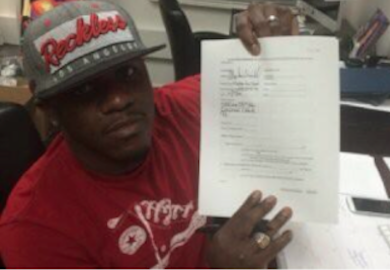 World Series of Fighting is happy to announce the addition of exciting striker Melvin “The Young Assassin” Guillard to the company’s lightweight roster.

The UFC veteran signed a multi-fight deal with the promotion and is expected to debut in the World Series of Fighting decagon in July.

“I’m excited to start a new chapter in my career,” said Guillard. “I feel like a brand new fighter with a great opportunity here with World Series of Fighting. I’m looking to prove I’m one of, if not the best lightweight in the world.”

“Melvin is an amazing fighter with an energetic style that has earned him a massive, loyal fan base, ” World Series of Fighting President Ray Sefo said. “He’s a guy that comes to fight every time he enters the cage, and I’m excited to see how he fares in our lightweight division.”

A 31-year-old New Orleans native, Guillard has competed for the UFC for the past six years, picking up 13 wins during that time, including eight victories by knockout. One of the most physically gifted and feared knockout artists in all of the sport, Guillard has been competing professionally since 2002 and boasts nearly 50 professional bouts to his name.
(photo cred: WSOF)