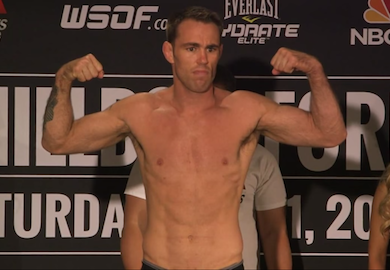 Ryan Ford let Jake Shields take the fight to the ground and he paid for it with a loss.

Shields got popped with a straight left from Ford early on in the fight and you could tell Shields had no interest in keeping the fight standing. Shields shot for a takedown, but Ford blocked it perfectly and started to ride a wave of momentum.

Shields pinned him up against the decagon fence and took him down with a headlock. Shields transitioned from side control to full mount and things were looking bad for Ford. Ford decided to give up his back to Shields, a veteran with five of his wins coming by way of rear naked choke. As expected, Shields let Ford move around until he exposed his neck and Shields jumped on it quicker than Palhares on a leg.

Jake Shields called out Jon Fitch after his victory tonight.

Jake Shields def. Ryan Ford by way of Submission (RNC) 4:29 of Round 1