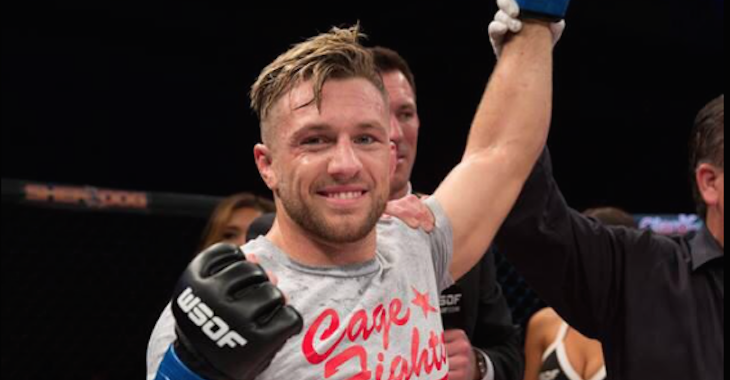 Back in September we reported that WSOF’s featherweight champion Lance Palmer would be defending his title in December, in Las Vegas.

Now, we have official confirmation from WSOF, who announced that Palmer will in fact be defending his title on Dec. 18, in Las Vegas at WSOF 26. His opponent has not been announced yet, but that’s because the winner of Alexandre Almeida and Saul Almeida will earn the title shot. Those two will fight at WSOF 24.

Also announced for the WSOF 26 event is the return of Tyrone Spong. An opponent for Spong has also yet to be announced.

Check out the official press release below!

LAS VEGAS (Oct. 14, 2015) – World Series of Fighting (WSOF) will head to The Chelsea inside The Cosmopolitan of Las Vegas for the first time ever with a star-studded, world championship event featuring the long-awaited return of Tyrone “King of the Ring” Spong as well as a title defense by reigning featherweight champion Lance Palmer, on Friday, Dec. 18, live on NBCSN at 9 p.m. EST / 6 p.m. PST.