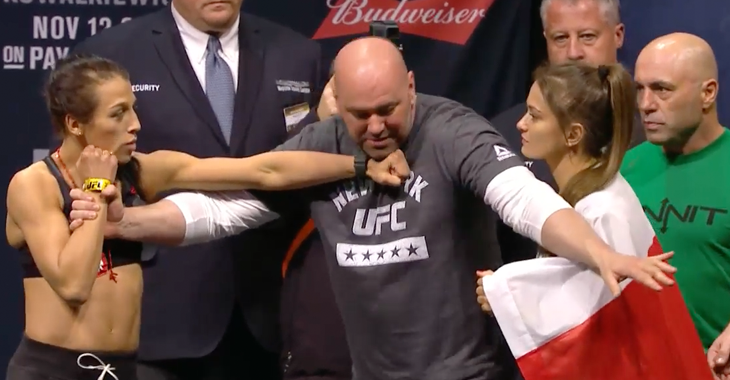 The UFC women’s strawweight championship takes place on what many are calling the biggest UFC event ever to take place. Both women hail from Poland and carry undefeated professional MMA records. One will leave with the belt and the other will walk out of the Octagon tasting defeat for the first time in their professional career.

The two Polish scrappers went head to head for the UFC 205 weigh-in staredown and the mood was tense as Jedrzejczyk put her fist out to Kowalkiewicz.

"She could be the most intimidating champion on the entire roster."@joannamma vs. @KarolinaMMA #UFC205 https://t.co/UWHMXA58eD

“I am ready, I can’t wait. This is New York, everything is possible. New York, new champ.” Kowalkiewicz said of her opportunity coming on Saturday night.

“I came here for you guys,” Jedrzejczyk said to the packed crowd in attendance for the weigh-in. “And still, forever and ever.

Who are you picking to win the UFC women’s strawweight championship fight between Joanna Jedrzejczyk and challenger Karolina Kowalkiewicz? Sound off in the comments!