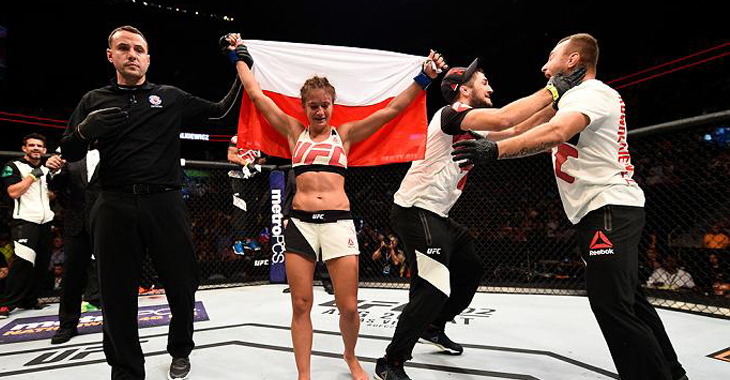 This weekend, the UFC will take over the combat sports Mecca of Madison Square Garden with UFC 205. The card, which will mark the organization’s first show in New York City, is topped by a trio of epic title fights.

The first of these title fights will occur at strawweight, where undefeated Polish champion Joanna Jedrzejczyk will defend her title against Karolina Kowalkiewicz, who is coincidentally also an undefeated Polish fighter.

Now that this mammoth fight card is just days away, both Jedrzejczyk and Kowalkiewicz have arrived in glimmering New York, where they will make their final preparations, fulfill the last of their media obligations, and of course, do a bit of exploring.

Kowalkiewicz’s recent explorations of the world famous metropolis took her to glowing Times Square, where she encountered her own face on a billboard hanging high above the throngs of New Yorkers and tourists that darted about the area. This, unsurprisingly, prompted a Instagram post. In this post, Kowalkiewicz reflected on her pro debut four years ago, and explained that she made this pro debut in shorts procured at a second-hand store. Needless to say, she’s come a long way.

A video posted by Karolina Kowalkiewicz (@karolinakowalkiewicz) on Nov 7, 2016 at 6:18am PST

“4 years ago, when I fought my first professional fight, I wore shorts that I bought in a second-hand shop for a dollar,” Kowalkiewicz wrote in the English portion of her post. “Now my face is on an advert in the most expensive commercial space in the world, on Times Square in New York. Faith and hard work make miracles, dreams really come true.”

This must have been a pretty surreal moment for Kowalkiewicz, who will enter her bout with Jedrzejczyk as a sizeable underdog. Does the Polish challenger’s fairy tale continue with an upset win this Saturday? Sound off, PENN Nation!