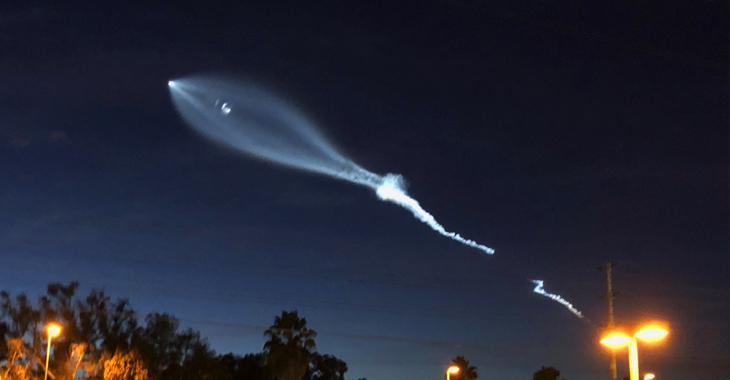 Can you imagine that you are diving in your car, admiring the dark blue expanse of the heavens, when suddenly all these humongous, streaking blobs spread across the sky? You pull off the road along with other drives and look up, trying to take pictures or record some video for social media or to preserve this moment in case it’s the night that aliens visit Earth. In that crazy moment, you turn to your left and there is Tito Ortiz doing the same thing. That may have happened to someone last night as the former UFC light heavyweight champion tried to figure out if this was real life.

“SpaceX’s Falcon 9 rocket, launched from Vandenberg Air Force Base at 5:27 p.m., was carrying 10 satellites to low-Earth orbit. The satellites will be part of a constellation operated by Iridium Communications. All 10 satellites successfully deployed, with the last one deploying about 1 hour and 12 minutes after liftoff.”

“Officials had warned the launch could be seen across Southern California and beyond. But on the day before the holiday weekend, the streaks of light against the blue sky were something to behold. Many people pulled over their cars to take photos and videos of the sight. The Los Angeles Fire Department put out an advisory saying the “mysterious lights in the sky” was from the Vandenberg launch.” — via the LA Times.

Of course, it wasn’t a UFO, but rather an IFO: An Identified Flying Object. Elon Musk successfully launched his SpaceX Falcon 9 rocket and social media was like our generation’s version of the War of the Worlds radio broadcast from 1938. Despite being warned by local authorities and Musk himself, people still were freaking out. Tito Ortiz wasn’t even the only fighter who questioned what was really happening last night. GLORY and Bellator kickboxer Joe Schilling took to Instagram in a similar fashion.

We supposed to just pretend this shit didn’t just go across the sky here in LA? #wtf @eddiebravo10 shouldn’t rockets go UP? 🚀